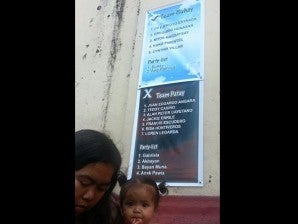 MALOLOS, Philippines – Roman Catholic Church leaders in Bulacan have advised their parishioners to heed their conscience when they vote on May 13, and not join the bandwagon and wage war against senators branded as members of either “Team Patay” or “Team Buhay.”

Fr. Dars Cabral, head of the social communications commission of the Malolos diocese, told a Thursday news conference that the diocese would allow devotees to choose for themselves their preferred senators and local officials on May 13, regardless of whether these candidates advocated or opposed the reproductive health law.

Cabral said a six-day synod was scheduled on April 8 to tackle the issue, given the diocese’s belief that matters of the state should not be influenced by the Church.

A synod is an assembly of church members who gather to discuss policy reforms and church programs for the community.

Cabral said one of the proposed policy modifications being presented to the synod was to allow church laymen to take the lead in debating or advocating issues, instead of priests.

“We leave it to the laymen and not the church to stand on issues, [heeding the constitutional provision on the] separation of church and state. That has been the stand of the church before, which we maintain today. The church only speaks on controversial issues that [impact on] the moral conscience of the people,” said Cabral.

For example, if a law bans people from going to church, “that law takes away our right to religion and it is beholden upon the Church to react,” he said.

Arvin Ray Jimenez, Malolos diocese public relations officer, said 57 clergymen and community leaders will attend the synod, which is expected to come up with reforms in the polices of the local church.

The first synod was held in 1987 following the silver jubilee celebration of the Malolos diocese. This latest synod on April 8 to 13 follows the diocese’ golden jubilee.

“There will be modifications in our policies and definitely these [involve] the RH law. We need to remind our laymen that they should not side with either Team Patay or Team Buhay because senatorial candidates [who make up pro-RH and anti-RH] are being served by the Catholic Church,” Cabral said.

“Are those candidates of Team Patay not members of the Catholic Church? They are Christians like us, so we should not compel devotees to choose one side and forget the other,” he said.

Jimenez said some of the reform proposals laid out for the synod involve evangelization and ecumenism. “If the synod concludes that we will need to go from house to house to bring the church closer to the people, that will be discussed and resolved next week,” he said.