Binay: ‘I pity my daughter’ 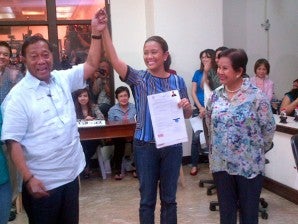 LUCENA CITY, Philippines – Amidst mounting opposition against political dynasties, Vice President Jejomar Binay could not help but pity his daughter, Nancy, who is running for senator under Binay’s United Nationalist Alliance (UNA).

Speaking to thousands at the Quezon Convention Center on Friday, the Vice President said alleged efforts to discredit his daughter, Nancy, were unfair.

He said that his daughter has been subjected to demolition efforts “kawawa naman ang anak ko [I pity on my daughter].”

The younger Binay has been hit with criticism after criticism, particularly over her lack of experience in public office, something which she admitted hurt the most out of all the attacks she has received.

But in a recent interview, the UNA candidate maintained that she had no regrets in joining politics and was even willing to “go through this process all over again.”

What was necessary at this point was for a new kind of politics, one that is devoid of mudslinging, according to the Vice President.

“Sana magsama-sama tayo sa bagong pulitika kung saan walang paninira [We’re hoping that we can be united towards a new politics, where there is no criticism],” he said.