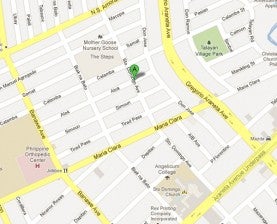 MANILA, Philippines—A college student waiting for his girlfriend was shot dead early Monday at a busy intersection in Quezon City.

Art John Paul Arongat, 22, died immediately from several gunshot wounds after the shooting at the corner of Sto. Domingo Avenue and Atok Street.

The case investigator, Senior Police Officer 1 Cristituto Zaldarriaga, said the student, a resident of Mazaranga Street, was with a cousin while waiting at around 12:05 a.m.

Witnesses pointed to an assailant who rode a green sports utility vehicle of still unknown make and license plate.

Arongat was in Barangay (village) Sto. Domingo at that time, waiting for his girlfriend, a certain Carmie Moto.

However, the woman never showed up. Instead, a green SUV arrived, from which the gunman alighted.

Witnesses said the gunman walked toward Arongat and shot him, who tried running away but ended up being chased by the suspect.

The wounded victim eventually fell in front of the Senya Café at the corner of Tirad Pass Street and Sto. Domingo Avenue.

The gunman then boarded the fully occupied SUV and fled the area.

Zaldarriaga said the victim’s cellphone showed that Arongat had been receiving threats from an unsaved cellphone number.

One of the messages reportedly read: “Tigilan mo na asawa ko, kung hindi papatayin kita. (Stop your affair with my wife or else I will kill you).”

Zaldarriaga added that they have been checking closed circuit television cameras in Barangay Sto. Domingo if the SUV was caught on camera.