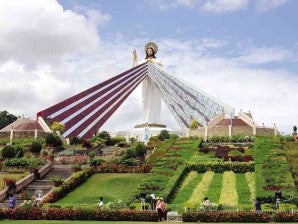 THE 50-FOOT image of Jesus Christ rises above the site of the Divine Mercy shrine in El Salvador town in Misamis Oriental, which has become a pilgrimage site for devotees in search of miracles and closeness to God. CAI PANLILIO/INQUIRER MINDANA

It was a trek that shrine caretakers had expected.

What makes the shrine stand out, literally, is a 50-foot image of Jesus Christ rising above the shrine site.

People are also attracted by water from the springs coming from a hill near the shrine that allegedly has miraculous powers.

“It’s every person’s nature to search for his own personal God, to search for something more absolute, and this shrine makes them at home because they can find their own peace in this place,” said Fr. Medallo Valmores, vice rector of Divine Mercy Shrine.

He said devotees do not come from El Salvador and Cagayan de Oro alone because in the past, he had met pilgrims from Luzon and the Visayas, and even from abroad.

Valmores admitted that while they had estimated the number of pilgrims this year to be about 3,000 only, it might actually be more than that.

He said last year, the estimate was also conservative but at least 5,000 people came.

Valmores also admitted that hosting a large number of people remained a concern because it was not easy to maintain order.

Valmores said maintaining silence in the shrine is very important because Divine Mercy devotees in the Philippines are different from those in other countries.

He said Filipino Divine Mercy devotees “are more open to devotion, probably because their minds are more focused.”

Luna Chan, 42, said she has been a devotee of the Divine Mercy since 2003 and regularly travels from Bukidnon to El Salvador during weekends to attend Mass and give her devotion to the Lord.

“Coming here has always given me a sense of peace that I do not find elsewhere,” she said, adding that her devotion did not change even when she was diagnosed with ovarian cancer last year.

“It was easy for me to accept my condition because I have long submitted my life to Christ,” Chan said.

Fr. Walerian Pozniak, MIC, the shrine’s rector, said he had an awkward feeling when he first came to the shrine, especially after seeing the huge statue of Christ.

“I felt that the statue was not according to the revelations of Jesus… the diaries of St. Faustina, the Apostle of the Divine Mercy, indicate only images, not statues,” he said.

But Pozniak said he had a change of heart when he saw how the statue helped strengthen the devotion of pilgrims.

“I am touched by the way people pray here because it makes me realize the presence of the Lord,” he said. Cai Panlilio, Inquirer Mindanao