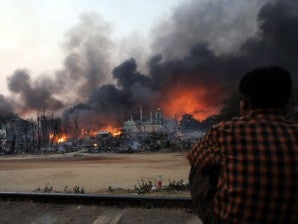 A resident watches as black smoke rises from burning houses in riot-hit Meiktila, central Myanmar on March 21, 2013. At least 10 people have been killed in riots in central Myanmar, an MP said on March 21, prompting international concern at the country’s worst communal unrest since a wave of Buddhist-Muslim clashes last year. AFP FILE PHOTO

JEDDAH, Saudi Arabia–The head of the Organization of Islamic Cooperation said on Saturday that ministers from OIC states will meet on April 14 in Saudi Arabia to discuss deadly violence against Muslims in Myanmar.

Ekmeleddin Ihsanoglu said in a statement that a contact committee of OIC foreign ministers would gather in the Red Sea port of Jeddah.

State media in Myanmar reported on Saturday that the death toll from communal violence in the center of the country over the past 10 days has risen to 43 with more than 1,300 homes and other buildings destroyed.

An OIC statement said Ihsanoglu addressed a contact group meeting on violence against Myanmar Muslims known as Rohingya on Saturday and said the organization was “ready to take all necessary measures and actions to deal with it”.

Ihsanoglu also pressed the government of Myanmar to “put an end to the Buddhist extremists and hate campaigns, as well as ethnic cleansing that they had launched against Muslims in the country.”

On Friday, Myanmar strongly rejected comments by the UN’s special rapporteur on Myanmar human rights, Tomas Ojea Quintana, the previous day that he had “received reports of state involvement in some of the acts of violence.”

Buddhist mobs have marauded through several towns in central Myanmar since religious violence erupted on March 20, prompting the government to impose emergency rule and curfews in some areas.

It is the worst sectarian strife since violence between Buddhists and Muslims in the western state of Rakhine last year left at least 180 people dead and more than 110,000 displaced.

Myanmar’s Muslims — largely of Indian, Chinese and Bangladeshi descent — account for an estimated four percent of the population of roughly 60 million.

Read Next
Pope’s foot-wash a final straw for traditionalists
EDITORS' PICK
Harnessing technology for quality education
Hidilyn Diaz wins weightlifting gold in Tokyo Olympics
Tips for a cheerful life
Duterte: When I said I will fight drugs in 6 months, I thought it was like in Davao
Another joke? Duterte mulls return of Balangiga bells to keep US away
Connect to PH’s fastest network with new Signature Plan Lite at only P599 per month
MOST READ
Duterte acclaims Sotto: ‘He can become a good vice president’
Hidilyn shoots not only for gold but also for permanent place in PH sports history
Duterte’s SONAs: From wishing to resign to saying he’s inutile
Go to war with China over West PH Sea? It will be a ‘massacre’, says Duterte
Don't miss out on the latest news and information.