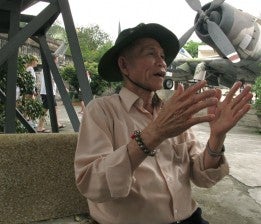 Vietnam war veteran Ho Van Minh talks about his experience as a North Vietnamese soldier during the war at the Vietnam Military History Museum in Hanoi Thursday, March 28, 2013. The 77-year-old lost his right leg to a land mine while advancing on Saigon, just a month before that city fell. Friday, March 29, marks the 40th anniversary of the American withdrawal of combat troops from Vietnam. AP

HARTFORD, Connecticut — Early in the Vietnam War, the U.S. military trained former Maj. Sar Phouthasack in special combat operations and sent him back into his native Laos to put together a local force to patrol the Ho Chi Minh Trail, rescue downed U.S. pilots and conduct sensitive operations behind enemy lines.

Phouthasack was part of the Special Guerrilla Unit, known as the “secret army” that the CIA established to conduct covert operations in Laos, where North Vietnamese forces were operating but U.S. forces were forbidden by Congress to enter.

More than 35,000 local fighters from the unit died in combat in Laos, and thousands eventually relocated to the U.S. and became citizens.

Phouthasack helped organize a daylong event in New Britain on Saturday to honor the special unit of Lao and ethnically Hmong men who were organized and funded by the CIA. About 200 veterans are expected to gather from around the country in an event that is part of the U.S. Department of Defense’s multi-year commemoration of the 50th anniversary of the Vietnam War.

Since arriving in the U.S., the former fighters have not been eligible to receive military veterans benefits. In the coming weeks, unit veterans and the SGU National Headquarters in Windsor, Connecticut, say they will petition Congress for formal recognition of their service and for U.S. veterans benefits.

“We don’t ask for a million dollars or something like that because we know the government doesn’t have enough money,” said Phouthasack. He said he wants the standard benefits, such as medical care and the option of a military burial.

When the war ended in 1975, most unit members escaped the communist takeover in Laos by fleeing to refugee camps in Thailand before thousands moved to the U.S. Phouthasack served the U.S. military for 20 years in Laos, Vietnam, Cambodia and Thailand before he moved to Connecticut in 1983 with his family and became a U.S. citizen.

Dennis Tarciani, who served in the Marines during the Vietnam War and is a senior adviser at the SGU National Headquarters, said the unit members saved many American lives.

“One pilot was downed 12 times and saved by the SGU each time,” Tarciani said. “The SGU were recruited, trained, paid and led by the U.S. government. They feel that they were part of the American military.”