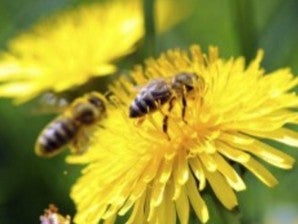 This in turn threatened entire colonies of bees whose pollinating functions are vital for human food production, they wrote in the journal Nature Communications.

The team observed honeybee brains in the lab after exposing them to neonicotinoid pesticides used on crops, and organophosphates, the most widely used group of insecticides in the world — in this case coumaphos — sometimes used to control mite infestations in beehives.

Exposed to similar concentrations of the two pesticides as they would encounter in the environment, the learning circuits of the bee brains soon stopped working, said the researchers.

“Together, the two classes of pesticide showed a greater negative effect on the bee brain and are predicted to inhibit honeybee learning,” co-author Christopher Connolly of the University of Dundee’s Medical Research Institute told AFP.

“Pollinators perform sophisticated behaviours while foraging that require them to learn and remember floral traits associated with food,” added colleague Geraldine Wright of Newcastle University’s Centre for Behaviour and Evolution.

“Disruption in this important function has profound implications for honeybee colony survival because bees that cannot learn will not be able to find food.”

The finding comes amid a fierce debate on the continuing use of neonicotinoids.

Two weeks ago, European nations rejected a proposed two-year ban on the brain-targeting group of insecticides following opposition by the agrochemical industry.

Beekeepers in Europe, North America and elsewhere are worried by so-called colony collapse disorder — a phenomenon in which adult bees abruptly disappear from beehives — which has been blamed on mites, a virus or fungus, pesticides or a combination thereof.

Bees account for 80 percent of plant pollination by insects. Without them, many crops would be unable to bear fruit or would have to be pollinated by hand.

The researchers said their findings should prompt a rethink of pesticide use.

“Our data suggests that the widespread use of coumaphos as a miticide is an unnecessary risk to the health of honeybees,” said Connolly, and proposed organic acids may be more appropriate for hive mite control.

“In terms of crop protection pesticides, it is claimed by the agrochemical industry that alternatives to the neonicotinoids would be more toxic to bees.

“A direct comparison of the alternatives appears to be the only way forward” to find the least harmful alternative, he said.

Commenting on the study, apiculture (beekeeping) professor Francis Ratnieks of the University of Sussex said the concentrations used in the study appeared to be high.

“It is no surprise that insecticides at high concentrations are harmful, but we don’t know whether the low levels of neonicotinoid insecticides in the nectar and pollen of treated plants… are harmful in the real world.”

Furthermore, coumaphos was not legal for use in much of Europe and not widely used in the United States, said Ratnieks, quoted by the Science Media Centre in London.