Berezovsky's billions: How the tycoon lost so much | Inquirer News
Close
menu
search

Berezovsky’s billions: How the tycoon lost so much 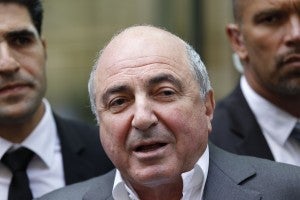 LONDON — How do you burn through billions?

The unexplained death of Boris Berezovsky, whose body was found Saturday inside his upscale English home, has refocused attention on the fantastic wealth racked up by Russia’s ruthless oligarchs — and their propensity for spending it. Berezovsky, 67, had once been considered Russia’s richest man — but by this January, a British judge was wondering whether the tycoon would be able to pay his debts.

Police say Berezovsky’s death is unexplained but that there was no evidence of anyone else being involved. His lawyer said the oligarch had been in “a horrible, terrible” emotional state. The tycoon had survived several assassination attempts, including a 1994 car bomb in Moscow, and there was speculation as to whether his death was natural, part of a conspiracy or a suicide.

To understand how one man could lose so much money, it helps to see how he made it in the first place.

Foundations of a fortune

Berezovsky, a mathematician, made his fortune in the 1990s during the catastrophic privatization of the Soviet Union’s state-run economy. That era was marked by hyperinflation, contract killings and rampant corruption. As Russia’s GDP crumbled, oligarchs leveraged their ties to ruthless criminals and crooked officials to tear off huge chunks of the country’s assets for themselves, draining resources and stripping factories to build fabulous fortunes.

Berezovsky — whose interests ran from automobiles to airplanes to aluminum — was one of this dark period’s primary beneficiaries. He became a political operator in Russian President Boris Yeltsin’s inner circle, trading on his connections to rack up assets estimated by Forbes to be worth roughly $3 billion in 1997.

“No man profited more from Russia’s slide into the abyss,” author Paul Klebnikov wrote in a critical profile of Berezovsky titled “Godfather of the Kremlin.”

The tycoon had been instrumental in orchestrating the accession of Yeltsin’s successor, Vladimir Putin, but when the new leader and Berezovsky began to clash, his political cover disintegrated. Berezovsky then fled the country in 2000, eventually claiming political asylum in Britain.

How much money Berezovsky really had — and how much he was able to take with him from Moscow — remains shrouded in uncertainty. Rich Russians at the time routinely stashed their money in labyrinthine offshore trusts or held assets under the names of associates or family members. Many deals weren’t even put into writing.

What’s clear is that the 1998 Russian financial crisis, coupled with Berezovsky’s spectacular fall from political grace, had a big impact on his bottom line. Forbes estimated his post-Moscow fortune in the hundreds of millions. Rival oligarch Roman Abramovich testified in court that Berezovsky had been down to his last $1 million when he fled Russia.

If Berezovsky were strapped for cash, he didn’t show it. He rode around London in a reinforced Maybach limousine and was often seen huddled with business contacts in the exclusive hotels that line London’s Hyde Park. His string of oversize mansions in England, France and the Caribbean suggested he was a cut above the average millionaire.

Russian officials seemed to believe that Berezovsky had plenty of cash on hand, trying — with mixed success — to claw back some of the exile’s assets. Charges are still pending against him in relation to the alleged embezzlement of some $13 million from Russia’s now-defunct SBS-Agro bank. Berezovsky had also previously been convicted in absentia of bilking hundreds of millions of rubles from the airline company Aeroflot and the carmaker AvtoVaz.

The bills pile up

Berezovsky often expressed a fondness for Britain’s legal system, despite his frequent and expensive encounters with it. A search of British court records throws up roughly three dozen judgments — libel, fraud, divorce, breach of contract — involving the tycoon in some way.

His second wife sued him for a divorce. His girlfriend sued him for a house he’d promised her. He sued the wife of his long-time partner, Badri Patarkatsishvili, in a complicated dispute over how to split the man’s assets after his death.

The sums involved were staggering. The loan deal was worth $5 million. His second divorce settlement in 2011 reportedly cost him 100 million pounds (about $154 million at the time). Patarkatsishvili’s assets could be worth hundreds of millions more. The biggest lawsuit of all, against Abramovich for breach of contract and blackmail, was for a mind-boggling $5.6 billion.

Berezovsky lost the lawsuit against Abramovich last year and the judge involved stopped just short of calling him a liar. He was stuck with tens of millions of pounds in legal bills.

Whatever the extent of Berezovsky’s wealth, his expensive divorce, Patarkatsishvili’s death and his paper mountain of litigation left it much reduced.

In 2008, Berezovsky was forced to sell the Darius, a 110-meter (360-foot) -long custom-built yacht that many believed was an attempt to compete with an even larger ship, the Eclipse, being built for Abramovich.

Earlier this month, the Times of London reported that Berezovsky was downsizing his art collection, selling off his homes, firing staff and closing his office in London’s upscale Mayfair district.

In a January ruling in a dispute between Berezovsky and his ex-girlfriend Helena Gorbunova, High Court Judge George Mann wrote that the oligarch’s fortune appeared to have been spread thin.

“On the evidence, Mr. Berezovsky is a man under financial pressure,” he said.