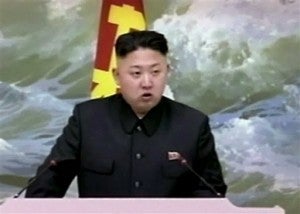 The inspection comes at a time of escalating tensions on the Korean peninsula, with multiple threats from the North of an armed response to joint South Korea-US military drills and to UN sanctions imposed after its nuclear test last month.

Kim, who holds the rank of Marshal in the Korean People’s Army, told Unit 1973 during a tour Friday that their mission was to “conquer the strongholds of the enemy”, according Pyongyang’s official Korean Central News Agency (KCNA).

“He said once a war breaks out, the unit should storm the heart of the enemies in a flash to strike and destroy the targeted military installations and reactionary ruling institutions of the puppet regime at a lightning speed,” KCNA reported.

Kim emphasised the need to conduct training under simulated battle conditions so the unit would be able to operate in enemy-controlled areas, KCNA said.

The special forces unit is believed to be based in the southwestern province of South Pyongan.

South Korea and the United States launched an annual military drill this month, prompting Pyongyang to announce the scrapping of the 60-year-old Korean War armistice, along with non-aggression pacts signed with the South.

The North has also threatened nuclear strikes on the United States and South Korea as a reprisal for UN sanctions imposed over its third nuclear test.

And last week Kim issued a threat to “wipe out” a small frontline South Korean island.

While most statements have been dismissed as rhetorical bluster, the threat to Baengnyeong, which has 5,000 civilian residents as well military units, is highly credible and carries the weight of precedent.

In 2010, the South Korean naval vessel Cheonan was sunk in the area of Baengnyeong with the loss of 46 lives, and later the same year North Korea shelled the nearby island of Yeonpyeong, killing four people.