Students in provinces press for UP reforms 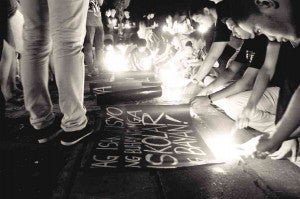 STUDENTS light candles during a rally at the UPLB Carabao Park for UP Manila student Kristel Tejada, whose suicide is being blamed on the government’s education policies. KIMMY BARAOIDAN/CONTRIBUTOR

Students outside Metro Manila are not letting up in their protests over education policies that they said led to the suicide of University of the Philippines Manila student Kristel Tejada.

In the University of the Philippines Los Baños (UPLB), student leaders joined calls for UP Manila officials to resign.

“We belong to one community, facing the same problem over this ‘no late payment’ policy and tuition increases,” said UPLB student Maria Paula Sarigumba.

Sarigumba, incoming student councilor, said UPLB students will hold a campus-wide mourning for Tejada, who took her own life after failing to pay her tuition on time.

A black cloth was draped on the UPLB Oblation statue on Tuesday.

Sarigumba, in a phone interview, said Tejada’s case is not isolated, while other students may not resort to taking their own lives.

She cited the case of Ynik Ante, a UPLB student whose proclamation as student council chair in 2012 was delayed due to unpaid tuition.

UPLB students took aim at the Socialized Tuition and Financial Assistance (STFA) scheme which automatically puts freshmen in Bracket A that requires them to pay P1,500 per unit unless the student applies to be put in a lower bracket depending on family income.

In Iloilo City, students of the University of the Philippines Visayas (UPV) also joined protests to demand an overhaul of the university’s tuition scheme and higher government subsidy for education.