Pope Francis calls for ‘respect’ for all religions 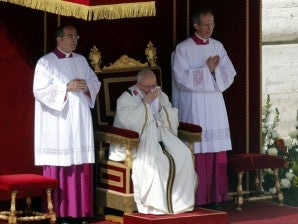 VATICAN CITY—Pope Francis on Wednesday called for “friendship and respect” among all faiths at a meeting with representatives of major world religions in the Vatican.

The Roman Catholic Church would “promote friendship and respect between men and women of different religions,” the pope said, a day after his formal inauguration in St. Peter’s Square.

“We can do a lot for the good of people who are poor, who are weak, who suffer… and to promote reconciliation and peace,” the pope told them.

Representatives of Orthodox Christianity, Judaism and Islam were among those present at the meeting.

Latin America’s first pontiff said they should be united against “one of the most dangerous pitfalls of our time — reducing human beings to what they produce and what they consume.”

The Argentine pope also said he felt “close” to those people who “do not recognize themselves in any faith but are in a search for truth, for goodness and for beauty, which is God.”

Turning again to religious community leaders, he said: “I very much appreciate your presence and I see in it a sign of mutual respect and of cooperation for the common good of humanity.”

Francis also assured Christians from other denominations of his “firm will to continue with the path of ecumenical dialogue”.

He also told Jewish leaders he wanted to continue “a fraternal dialogue” that began with the reformist Second Vatican Council of the 1960s.