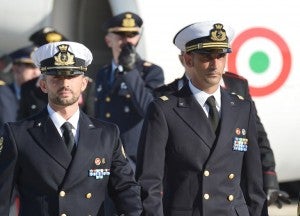 Italian marines Massimiliano Latorre (right) and Salvatore Girone arrive at Ciampino airport near Rome on December 22, 2012. India’s Supreme Court on March 14, 2013, issued an order to Italy’s ambassador to stay in the country for four days amid a dispute over two Italian marines who skipped bail while on trial in New Delhi. Italy on Monday, March 18, 2013, said India was violating a convention on diplomatic immunity by preventing the Italian ambassador from leaving the country in an escalating row over two Italian marines on trial for killing two Indian fishermen. AFP PHOTO/ VINCENZO PINTO

ROME, Italy—Italy on Monday said India was violating a convention on diplomatic immunity by preventing the Italian ambassador from leaving the country in an escalating row over two Italian marines on trial for killing two Indian fishermen.

“The Supreme Court’s decision to prevent our ambassador from leaving the country without the court’s permission is a clear violation of the Vienna convention on diplomatic relations,” the foreign ministry said in a statement.

“Italy continues to believe that the case of its two marines should be resolved according to international law,” the statement said.

India’s top judge earlier on Monday said that Italy’s ambassador Daniele Mancini had forfeited his diplomatic immunity over his role in securing the release of the two marines, who skipped bail while on trial for murder in New Delhi.

Chief Justice Altamas Kabir said Mancini, who had negotiated the Italians’ release last month so they could vote in an election, had waived his immunity by giving an undertaking to a court that the pair would return.

Massimiliano Latorre and Salvatore Girone, who are accused of murdering two Indian fishermen last year, had been given permission to fly to Italy to cast their votes in the election on the understanding that they would return.

But the Italian government announced last week that it would renege on its commitment to send the men back, prompting fury in New Delhi.

The Indian government has warned of “consequences” and is reviewing its ties with Italy, while the case is being watched carefully by India’s allies because it could set precedents over the treatment of foreign diplomats.

New Delhi has put its airports on alert to prevent Mancini from leaving the country and the Supreme Court issued instructions that “appropriate steps” should be taken to restrain him.

Without legal protection he could be prosecuted for contempt of court.

The marines face murder charges in India after shooting dead the fishermen off India’s southwestern coast in February last year, when a fishing boat sailed close to the Italian oil tanker they were guarding.

They say they mistook the fishermen for pirates.

Italy insists the marines should be prosecuted in their home country because the shootings involved an Italian-flagged vessel in international waters, but India says the killings took place in waters under its jurisdiction.

Relations between the two countries have also been soured by corruption allegations surrounding a $748 million deal for the purchase of 12 Italian helicopters, which the Indian government is now threatening to scrap.