Coed suicide sparks soul-searching at UP 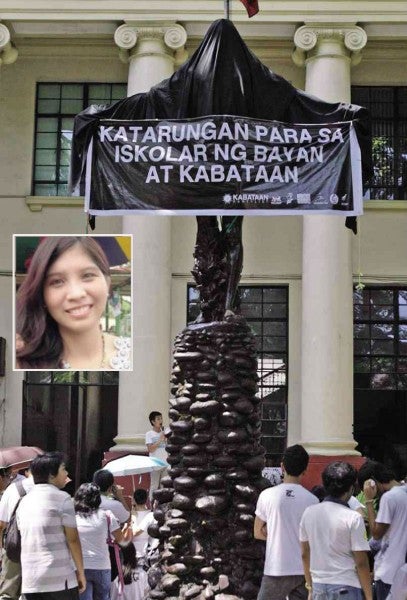 UP MANILA OBLATION IN BLACK Students at the University of the Philippines in Manila cover the Oblation statue with black cloth to protest the school’s “no-late-payment” tuition policy and the death of Kristel Tejada (inset). Tejada took her life on Friday after filing a leave of absence for failure to pay tuition. NIÑO JESUS ORBETA/FACEBOOK PHOTO

“The UP deprived my daughter of her only hope to help us,” said the father of Kristel Tejada, a freshman at the University of the Philippines (UP) Manila who took her life on March 15 at their home in Tayuman by drinking silver cleaner.

The suicide of Kristel, 16, the eldest of five children of a taxi driver and a housewife, came after she filed a leave of absence in the middle of the second semester for failure to pay tuition of less than P10,000.

“How painful was it to remove that sole hope to help your parents and yourself?” said Christopher Tejada after hearing Mass with wife, Blesilda, at the Philippine General Hospital chapel.

Kristel’s death triggered protests on the campuses of the UP System and prompted the UP administration to consider reforms in its socialized tuition scheme.

UP president Alfredo Pascual said the Socialized Tuition and Financial Assistance Program (STFAP) needed to be restructured to make the economic indicators that determine a student’s capacity to pay more realistic, the application process less tedious and the monthly allowance increased.

Pascual said he would propose to the governing UP Board of Regents at its meeting next month to lift the controversial “no-late-payment” tuition policy effective immediately.

“My position as UP president (is) no student shall be denied access to UP education due to financial constraints. I’m all for its lifting. I will immediately propose to the Board (of Regents) next meeting on April 12 to lift the ‘no-late-payment policy’ effective on all college units,” Pascual said in a statement issued at a press conference at the administration building on the UP Diliman campus.

The elder Tejada welcomed the call of the faculty and staff of the Department of Behavioral Sciences in UP Manila for the resignation of the school’s chancellor and vice chancellor.

Christopher told reporters that others may be more deserving to replace Chancellor Manuel Agulto and Vice Chancellor Josephine de Luna.

“Vice chancellor, you know how we asked for your help and humbled ourselves before you,” the father said.

Christopher accepted the return of his daughter’s UP identification card, which she had to surrender when she filed a leave of absence.

“It’s as if she lived for me. When she turned over her ID, it was like snuffing out her life. Perhaps she is happy now because her ID was returned [to us]. She’s still part of UP,” he said.

Kristel’s death “gave us a human face to the longstanding struggle against state apathy and neglect of the education of our youth” in the midst of limited opportunities and elitist policies, said the statement issued by the faculty and staff of the Department of Behavioral Sciences in UP Manila.

Sociology professor Jocelyn del Mundo read the statement at the Philippine General Hospital chapel after a Mass sponsored by the UP Manila Student Council for Tejada.

Del Mundo urged a review of the STFAP to make the system simpler, more student-friendly and efficient. She said other strategies like study-now-pay-later and installment payment schemes should be considered.

Despite the criticisms and protests against the memorandum on the no-late-payment policy, Agulto and De Luna “turned a deaf ear and persisted with their autocratic and callous style of leadership,” Del Mundo said.

Agulto decried the media’s portrayal of him and De Luna as “cold-hearted and ruthless.”

At the press conference, the official broke down and recalled how he was once in a situation similar to Tejada’s. “I was once a medical school student struggling to pay my tuition,” Agulto said, his voice cracking.

Pascual said his administration would institute an installment payment plan so cash-strapped parents could pay the tuition according to their salary schedule.

The no-late-payment policy was applied to Tejada whose application in December for a loan to cover her second semester tuition was denied because the semester was underway for nine weeks.

Tejada, who was assessed in May to fall under STFAP Bracket D, which requires her to pay P300 a unit plus miscellaneous fees, appealed last September or midway into the first semester to be reassessed into Bracket E2, which would have exempted her from paying tuition and entitled her to a stipend.

In her appeal, Tejada said her father was laid off from work and her parents were constantly fighting over lack of money. She was turned down reportedly for failing to submit supporting documents.

Her father was able to pay her first-semester tuition loan of P6,337 only on Dec. 19 and immediately asked that she be allowed to enroll for the second semester under a tuition loan.

The father’s appeal was denied as the UP Manila Office of Student Affairs cited a policy that bars the late payment of tuition when classes for the semester have begun.

Tejada’s mother’s personal appeal to Agulto was also denied. Agulto said he had to uphold the decision made by his officials.

“If only I knew the extent of her difficulties, I personally would have attended to her family’s needs,” Agulto said.

Under the STFAP, students are categorized according to their families’ annual income and other factors.

For UP Baguio, Mindanao, San Fernando and Visayas campuses, Bracket A students pay P1,000/unit; Bracket B P600; Bracket C P400; Bracket D P200 and Bracket E free tuition. Those who do not apply for STFAP automatically fall under Bracket A.

Pascual acknowledged a “mismatch” between the economic indicators and the actual financial need of students under the STFAP, while the long application and verification process delayed decisions on appeals to be reassessed, as what happened in Tejada’s case.

Under the proposed changes, Pascual said a student’s capacity to pay would be based not only on the family income but also on a socioeconomic classification based on aggregate expenditures.

He also said that the current stipend of P12,000 a semester for students under Bracket E2 was inadequate and that he would propose to increase this to P20,000 a semester.

Pascual said his administration would try to shift scholarships more toward a student’s financial need rather than academic excellence and seek to increase the slots for student assistants with higher allowances.

He said the 14-page application form would be cut down to two pages and the application processing time reduced from six months to two months.

Pascual added he hoped the Board of Regents would immediately approve the changes so these could be implemented by the start of the next school year in June.

The press conference was interrupted by some students’ attempts to protest the STFAP as they called for its immediate scrapping and for Agulto’s resignation.

Agulto said he was willing to resign if anyone could prove he did nothing to help Tejada. “You cannot say that we did nothing. But had I known her personal circumstances, I would have done even more,” he said.

Outside Quezon Hall on the UP Diliman campus, student protesters draped a black cloth on the statue of the Oblation.

Protesters also announced a students’ strike on all UP campuses to mourn Tejada’s death, called for the “rollback” in tuition and demanded accountability from UP officials in the wake of Tejada’s suicide.

Students of Polytechnic University of the Philippines held solidarity protests over the death of Tejada and the reported tuition increase in their school.

“We fear that if tuition and other fees increase in PUP, we will face the same fate as the UP Iskolar ng Bayan. We must protest the fee hikes,” said PUP student regent Helen Alfonso.

PUP president Emanuel de Guzman held a dialogue with the students and assured them that the tuition for undergraduate courses would remain at P12 per unit.

However, the fees will increase for graduate school and open university because these receive minimal government subsidy.