No more tiara but pomp and pageantry remain 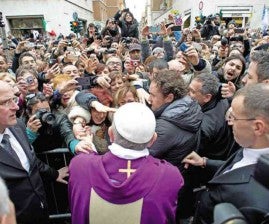 COMMON TOUCH Before entering the Vatican’s parish church, which serves hundreds of residents, Pope Francis shook the hands of parishioners and kissed babies. He began his first Sunday as Pontiff by making an impromptu public appearance from a side gate of the Vatican, startling passersby and prompting cheers. AP

VATICAN CITY—Pope Francis will be installed Tuesday in what is expected to be the biggest papal installation ceremony in history.

Italian newspapers said at least a million people should turn up for the event.

In keeping with the new Pope’s policy of making the Church closer to the people, the Vatican said it would not regulate the crowd. “No tickets will be issued for that Mass,” the press office said. “All who wish may attend.”

Although there will be no coronation, the papal installation will still have the pomp and pageantry of ancient papal coronations, observers said.

The last Pope to be crowned with the tiara was Paul VI in 1963. He abolished the practice when he became Pope.

“Obviously any papal installation beats any royal coronation or wedding,” said a Dominican apostolic confessor at Santa Maria Maggiore, where Francis offered flowers to the Madonna after his election on March 14.

“You’re talking about the inauguration of the Pope who’s leader of the biggest Christian denomination and the largest religion in the world,” he said.

Although some of the 6,000 press people accredited for the papal conclave have left, the Vatican media office said it expected as many press people to cover the installation, more than the 1,000 journalists who sought accreditation at the beatification of the very popular Pope John Paul II in 2011.

Donate money to the poor

The installation will also be attended by heads of states and governments eager to be in the good graces of the Vatican, which runs the world’s oldest and perhaps most successful diplomatic corps.

After the installation, according to the Vatican press office, the Pope “will receive the leaders of the official delegations at the Confessional Altar inside the Basilica.”

As he did in 2001, when he was made a cardinal by John Paul II, Francis has called on his Argentine countrymen not to come anymore to his installation and to donate instead the money for the trip to the poor.

But his appeal has largely fallen on deaf ears. Argentinians, led by President Cristina Fernandez de Kirchner, are expected to descend in droves to the installation of their proudest son.

Italians, who had held on to the papacy for centuries until the Polish Karol Wojtyla became Pope John Paul II in 1978, would hardly feel left out since Francis has Italian lineage. He also speaks fluent Italian, although with a Spanish accent.

He has further endeared himself to the Italians by choosing Francis as his papal name. St. Francis of Assisi is the patron saint of Italy.

Souvenir profiteers have found a windfall in the Francis frenzy, selling postcards of the new Pope smiling from the papal balcony on the night of his election for half a euro (P30) each.

The installation ceremonies will feature changes that reflect the reforms of modern popes in the past half a century.

It was Paul VI (1963-1978) who instituted broad papal changes that continue to affect the Church today. It was also Paul who mandated that cardinals who have reached 80 years old will not be eligible to take part in a papal conclave.

Although there are 155 cardinals in the world today, only 115 took part in the recent conclave.

Also upon receiving the tiara in 1963, Paul VI promptly sold his crown to the Americans and abolished the practice of coronation, the better for the papacy to shed its absolutist monarchist traces.

In the installations of the next popes, the tiara would remain, but it would be lodged on the head of the ebony statue of St. Peter, the first Pope, in the basilica named after him, which is the biggest church in the world.

The tiara that will now be lodged on the head of St. Peter will bear the Latin titles of the three ministries of Christ that his Vicar—the Pope—should perform: as Teacher, Prophet and Servant.

John Paul II abolished the practice of the cardinals paying public fealty to the new Pope during the installation ceremonies. During his installation in 2005, Benedict reaffirmed the innovation of his predecessor and received merely the homage of the representative cardinals of the various churches.

But before he stepped down on Feb. 28, Benedict issued a decree to restore the practice, so that all of the cardinal-electors will have to be present in his installation Tuesday to pay public homage to Francis.

It was also Benedict who widened the pallium, the tie-like collar whose end extends down to the floor that the Pope traditionally wears in solemn liturgical events.

As a result, Francis, noted for his simple fashion statements, will have to follow the example of Benedict and wear a wider and more fashion-elaborate pallium.

Wide or narrow, the pallium symbolizes the Christ-like qualities of the Pope and the need for him to follow the example of Jesus. It is brought together by three pins symbolizing the three nails that impaled Christ on the cross.

During the installation, Francis will receive the so-called fisherman’s ring (St. Peter was a fisherman). No design yet has emerged for the ring. In the past, Popes received rings with the symbol of a fisherman’s boat.

Also not yet known is the papal motto.

John Paul’s motto was “Totus tuus” (Truly yours), while Benedict’s was “Cooperatores Veritatis,” which means “Coworkers of the Truth.”