Beautiful life as doctor to generations of kids; 99 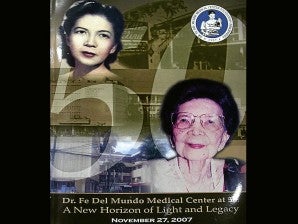 She passed quietly, succumbing to cardiac arrest, in the simple room at the Dr. Fe Del Mundo Medical Center in Quezon City where she has been living for years.

As she was a National Scientist, among other outstanding achievements, Del Mundo will be buried with honors at Libingan ng mga Bayani on Thursday, according to her niece Elisa Bengzon.

Her wake will be held at her Quezon City hospital. She will be brought to the Sto. Domingo church on Wednesday.

Bengzon found it fitting that her aunt, a devout Catholic who religiously went to Mass everyday up to her last years, died on the Feast of the Transfiguration of Christ.

“She is transfigured into the most beautiful Dr. Fe del Mundo,” she said.

Del Mundo’s family has found comfort in the outpouring of love from those whose lives she had touched.

And they are many, given her tireless devotion to children.

Del Mundo’s legacy and her teachings have been immortalized in a coffee table book published in time for her 99th birthday last year. It was called “Dr. Fe Del Mundo: A Beautiful Life,” and chronicled the accomplishments and teachings of the petite doctor who stood head and shoulders above many colleagues.

She never lacked for recognition, even in her twilight years.

Last year, the then President Gloria Macapagal-Arroyo conferred the Lakandula Award with rank of Bayani on the noted pediatrician.

She was also conferred the Ramon Magsaysay Award, which is Asia’s version of the Nobel Prize.

She has also been honored with the Elizabeth Blackwell Award for Outstanding Service to Mankind and was the first lay recipient of the Blessed Teresa of Calcutta Award, which is awarded to those who have dedicated their lives to serving the poor and who serve as an inspiration to the world.

Various other institutions, including medical ones, have also bestowed honors on her. So numerous were her awards that listing them took up eight pages of the coffee table book on her.

According to Del Mundo’s family, they have been informed that President Aquino had been planning on bestowing on Del Mundo the Grand Collar of the Order of the Golden Heart.

The Order of the Golden Heart “gives official recognition to Filipino or foreign citizens who have rendered distinguished services or given noteworthy monetary of other material aid, encouragement to the campaign for the amelioration and improvement of the moral, social and economic conditions of the Filipino masses, and for volunteerism in the service of the Filipino masses.” The Grand Collar is the highest rank under the order.

The same award was first given in 1955 to Hellen Keller, who dedicated her life to helping deaf-blind people in several countries including the Philippines. It was conferred on comedian Dolphy, or Rodolfo Quizon, last year in recognition of his contributions to the entertainment industry.

The acclaimed pediatrician lived in the Quezon City hospital named after her, which has been serving as a haven for ailing children since it opened in 1957.

Del Mundo’s life was a stellar example of one who has devoted her heart and soul to helping and comforting the afflicted.

She decided to turn to pediatrics upon seeing that more children than adults were dying, given the lack of doctors specializing in children’s health.

For her, medicine was more of charity work, not a means to material enrichment.

She put up a medical institution in the Philippines after choosing to return home from her studies in the United States, where she was the first Filipino woman accepted for postgraduate training at the Harvard Medical School in 1936.

She earned an associate in arts degree from the University of the Philippines at the age of 17, and graduated valedictorian from the UP College of Medicine.

Her dream of putting up a hospital began with “The Little Clinic,” which she put up in Mendiola, Manila. Since it was always overcrowded, she decided to put up a bigger hospital, selling her home to realize her dream.

She also made sure to help the poor by training teams of medical workers and sending them to remote provinces to treat sick children and provide health care, resulting in fewer children’s deaths. She also invented an open native incubator to be used by rural communities for premature, low-weight or jaundice-stricken babies.

She remained humble despite her many achievements, once joking that since she was the oldest living pediatrician, she was being given an award as the organizers didn’t know who else to give it to.

With so many activities on her plate, Del Mundo never married. But she was like a mother, a nurturing force, for all those children whose lives she touched, and to whom she gave her all.

And she felt rewarded in turn.

In her own words immortalized in her book, Del Mundo shared what her passion meant to her: “I am glad I have been very much involved in the care of children. They are the most outstanding feature in my life.”