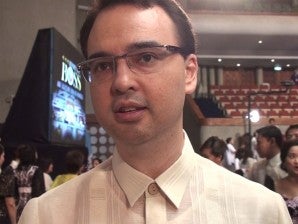 The Supreme Court proving to be unresponsive to a plea from worried television stations, reelectionist Sen. Alan Peter Cayetano has jumped into the breach in aid of relaxing the Commission on Elections’ (Comelec) rule on how much air time candidates would be allowed to buy.

Cayetano on Friday asked to join a litigation case brought before the Supreme Court by television networks contesting the Comelec’s power to set limits on air time for political advertisements.

In a petition-in-intervention, Cayetano accused the Comelec of exceeding its rule-making powers and usurping the powers of Congress in setting a 120-minute limit on TV ads and a 180-minute limit on radio ads for national candidates.

“Putting a limit on the advertising time of a candidate is unconstitutional. It limits the people’s right to information,” Cayetano told reporters at the Supreme Court docket section when he went to file his petition early on Friday.

“Comelec cannot issue a rule that is outside the wisdom of the intent of the law. The Fair Election Act (Republic Act No. 9006) in this case, intends for the restriction to be on a per station basis. Comelec now goes outside that by resolving to restrict airtime aggregately,” he said.

The Cayetano petition seeks to to annul or modify Section 9 of the Comelec Resolution No. 9615, which contains the contested rules, for having been issued with grave abuse of discretion amounting to lack or excess of jurisdiction. It seeks the issuance of a temporary restraining order (TRO) and/or a writ of preliminary injunction to enjoin Comelec from implementing and enforcing the provision.

GMA Network and TV5 filed the original suit against Resolution 9615 last month. The Supreme Court, however, did not issue a TRO against the poll body.

Cayetano said that if the high court fails to stop the Comelec, there would be “far-reaching consequences to the conduct and fate of the 2013 national and local elections.”

He said Resolution 9615 “smacks of prior restraint,” which he said violates freedom of speech, of the press and of expression, and stifles the people’s right to be informed on matters of public concern.

He said placing limits on advertising airtime, particularly for radio, would deprive the people of much-needed information about the candidates.

“With 180 minutes for all radio stations nationwide, that means candidates only have four 30-second spots for 80 provinces. Considering that we would also need to allot a great percentage of the 180 minutes to national issues, how will we get our message to our voters in the provinces and our stand on local issues with that limited amount of time?” he asked.

Cayetano said that while he recognized the rationale behind the Comelec resolution, the problem lies with its application.

“The goal was to equalize advertising opportunities among candidates and also to control their spending. But limiting advertising airtime actually has the opposite effect,” he said.

Instead of focusing on limiting advertising time, Cayetano the Comelec should focus its efforts in monitoring candidates’ campaign spending and the source of the funds used to advertise, claiming that some candidates are using money obtained from illegal sources, like gambling and smuggling, for their advertisements.