Pope Francis I: a litany of firsts 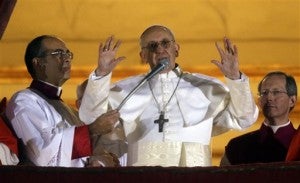 Pope Francis waves to the crowd from the central balcony of St. Peter’s Basilica at the Vatican, Wednesday, March 13, 2013. Cardinal Jorge Bergoglio who chose the name of Francis, is the 266th pontiff of the Roman Catholic Church. AP/Gregorio Borgia

VATICAN CITY—Francis I is the first pope from the Americas, as well as the first Jesuit, and the first non-European to become pope since the eighth century, when Syrian-born Gregory III was pontiff.

Argentina’s Jorge Mario Bergoglio, at 76 and three months, is the eighth-oldest pontiff at the moment of his election to accede to Peter’s throne, the oldest of all being Clement X in 1670, who was nearly 80. Francis I is nevertheless slightly younger than his predecessor Benedict XVI, who was 78 when he was elected in 2005.

He is the first pope to choose an original name since John Paul I in 1978, who was the first to do so since Lando, elected in 913.

Francis I is also the first Jesuit to become sovereign pontiff. Before him, one has to go back to 1492 and to the famous Alexander VI—the father of Cesar and Lucrece Borgia—to find a pope of Spanish mother tongue.

One also has to go back to Saint Gregory III, born in Syria in 690 and pope between 731 and 741, to find a non-European pope. Before Gregory III, a number of popes came from northern Africa and what is now the Middle East, including the first pope of all, Peter, born in Galilee, who became pope in the year 33.