Pope Francis is known for simplicity and humility 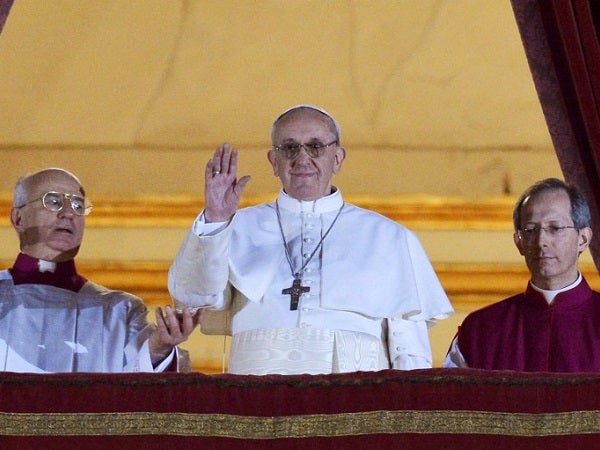 Argentina’s Jorge Bergoglio, elected Pope Francis I (center) appears at the window of St Peter’s Basilica’s balcony after being elected the 266th pope of the Roman Catholic Church on March 13, 2013 at the Vatican. AFP/VINCENZO PINTO

VATICAN CITY—In unadorned white robes, the first pope from the Americas sets a tone of simplicity and pastoral humility in a church desperate to move past the tarnished era of abuse scandals and internal Vatican upheavals.

The choice of Argentine Cardinal Jorge Bergoglio—who took the name Francis—reflected a series of history-making decisions by fellow cardinals who seemed determined to offer a message of renewal to a church under pressures on many fronts.

The 76-year-old archbishop of Buenos Aries—the first from Latin America and the first from the Jesuit order—bowed to the crowds in St. Peter’s Square and asked for their blessing in a hint of the austere style he cultivated while modernizing the Argentina’s conservative Catholic church.

In taking the name Francis, he drew connections to the 13th century St. Francis of Assisi, who saw his calling as trying to rebuild the Church in a time of turmoil. It also evokes images of Francis Xavier, one of the 16th-century founders of the Jesuit order that is known for its scholarship and outreach.

Francis, the son of middle-class Italian immigrants, is known as a humble man who denied himself the luxuries that previous Buenos Aires cardinals enjoyed. He came close to becoming pope last time, reportedly gaining the second-highest vote total in several rounds of voting before he bowed out of the running in the conclave that elected Pope Benedict XVI.