LUCBAN, Quezon—For most devotees who come from faraway places, the blissful moments at the “Kamay ni Hesus” shrine at the foot of Mt. Banahaw here seem short after a day of spiritual high in the breezy contemplative atmosphere of the religious complex.

To address the hunger for a longer communion with the divine, especially during Lent, administrators of the five-hectare shrine transformed into a “Garden of Eden” the space at the base of the way to the 50-foot statue of the Ascending Christ. 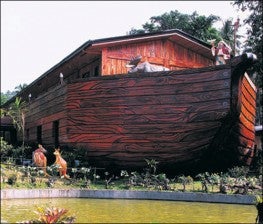 “Upon setting foot at the garden, a devotee will meet biblical personalities, from Abraham, Moses and others. The panorama of divinity also depicts momentous biblical events like the Great Deluge with its Noah’s Ark,” said Fr. Joseph Faller.

Faller, 46, is popularly known as “Fr. Joey” who is believed to possess a gift from God to cure the sick.

The garden features a concrete replica of Noah’s Ark, which God instructed Noah to build to save a pair of animals on earth from the great flood.

“But instead of depicting the earth’s destruction during the great deluge, what we’re presenting here is its glorious aftermath—a new beginning which is symbolized by the presence of Noah’s Ark and different animal figures in various forms of contentment,” Faller said.

Noah’s concrete image standing at the bow of the ark shows him about to release a white dove tasked with searching for dry land after spending 40 days and 40 nights in the midst of endless rains.

The ark is not only an imposing edifice in the 2.5-ha Garden of Eden but also a sanctuary for tired and lost souls, as it also serves as a retreat house.

“For spouses and family members, Christian groups, employees who want to conduct their retreats, seminars and bonding moments, the ark will be their spiritual refuge where they can renew their life, enrich their relationship with God and with one another for them to experience a new beginning,” Faller said.

Walk-in devotees who want to stay longer can check at the front desk at the lobby of the ark entrance.

“But I’m afraid that would not be possible during Lent. Our reservation has been fully booked as early as last year when we opened the ark to the public,” he said.

The ark, built for about P15 million and officially named “Noah’s Ark House of Prayers and Spirituality,” was inaugurated on Oct. 10, 2010. The marker at its entrance also bears the names of Felicidad T. Sy and Margie Lim, who Faller said were generous donors.

The ark is also called “Bahay Pari” as it is envisioned to be the refuge for old priests of the Diocese of Lucena, which runs the vast complex.

The complex is also envisioned to be a top Lenten destination in the country mainly due to the mammoth icon of the resurrected Christ on a hilltop in Barangay Tinamnan, 2 kilometers from the town proper.

Inside the ark is a two-story structure housing 25 air-conditioned single, double and dormitory-type bedrooms, refectory and seminar room. A chapel is under construction at the bow of the ark.

The facility offers discounted packages for whole-day group events that range from P200 to P400 per person including food.

Children of retreat participants can safely roam and play in the garden that offers a slide built along the side of a concrete elephant figure, watch religious movies and video documentaries in the cave-like “rock theater,” relish the sight of fresh water fish in the “Sea of Galilee” or retrace the Genesis and meet popular biblical characters through concrete icons scattered around the mount.

Faller said that after the religious complex was built in 2005, it received many queries from devotees.

“We were asked why there were lots of religious crosses at the site and why the steep and punishing climb to reach the resurrected Christ. My reply: ‘Because we all have sinned and we need salvation,’” Faller said.

The priest said he also saw the need to explain the entirety of the Holy Bible and depict the missing period via a panorama of spiritual icons to satisfy a pilgrim’s search for enlightenment.

When the diocese decided to build the ark, Faller and his associate, Fr. Angelo Jaballa, the shrine administrator, conducted intensive studies, and sought technical advice from engineers and architects and knowledgeable parishioners who offered their knowhow without charge.

“We decided that as much as possible we remained loyal to its original design. Though we used concrete we made it appear as wood by painting it to resemble the original ark,” said Faller.

He recalled that the construction of the ark started just as Tropical Storm “Ondoy” was wrecking havoc on Metro Manila.

“We came to realize that our life is most often decided by natural calamities and destruction. And that strengthened our resolve to proceed with the project. We wanted to offer a place for Christians to start anew,” Faller said.

The diocese wants to complete the facilities because several bishops across the country had declared their desire to hold their annual retreat in Noah’s Ark, he added.

About P5 million more is needed to complete the facility, he added.

Faller also disclosed plans to acquire a two-hectare piece of land adjacent to the shrine so that a dome-like chapel could be built to accommodate the influx of devotees especially during Lent.

Faller said close to one million visitors were expected to visit the shrine for Holy Week.

“We now have at least 200 volunteers to help the authorities in maintaining trouble-free traffic flow and peace and order,” he said.

The shrine offers a wide parking space for devotees at P30 per vehicle. To provide comfort to the pilgrims, the complex is also dotted with “mini-huts” in strategic spots that can be rented for P50 an hour.

The religious center also offers souvenir shops and mini restaurants that serve native food such as the famous “longganisang Lucban” “pansit hab-hab” and “budin” (cassava cake) among many other delicacies.

“This is not a commercialization of the shrine. We just want the devotees to be comfortable during their stay. What we’ve been getting from the modest rent is used for the upkeep and maintenance of the shrine,” the priest said.

Faller reminded pilgrims not to ask for plastic wrappers and bags to pack things because the use of plastic was banned by the municipal council a couple of years ago.

But even with more changes at the shrine, the main feature that continues to attract devotees is Faller’s famous healing power.

“I welcome them all. We will all travel in a spiritual journey, heal the people and enrich their lives as Christian and children of God,” he said.