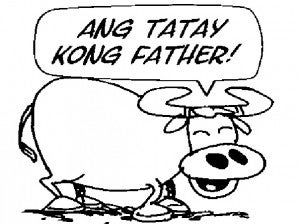 This is a case of tit for tat.

The Bacolod Diocese is getting its share of attacks after hanging its controversial “Team Patay/Team Buhay” tarpaulin at San Sebastian Cathedral in Bacolod City to inform voters who among the senatorial candidates to support and reject due to their stance on the reproductive health (RH) law.

The text message, which allegedly came from Buklod ng Malayang Pilipino, identified five priests of the Bacolod Diocese who have allegedly sired children.

A poster titled “The Team Damaso ang Tunay Na Patay” was also being circulated in the popular social networking site Facebook. The poster contained the names and photos of Bacolod Bishop Vicente Navarra, an archbishop, three bishops, one retired bishop and one priest.

“Beware of these clowns,” read the statement at the bottom of the poster.

“These attacks are very unchristian,” he said.

“Some priests who have had indiscretions in the past have realized what they did, shown that they are repentant, reformed and have made amends,” he added.

The text message, which was written in Hiligaynon, started circulating in Bacolod on Friday.

The message started with “Team Tatay,”which identified five priests of the Bacolod Diocese who allegedly fathered some children even if they remained priests.

It said the faithful should not attend Masses celebrated by these priests or give donations, especially since they never owned up to having fathered children.

These priests, it added, were living on the goodness of the faithful.

The text message said the list was only partial, and more names would be revealed soon.

Navarra said the Team Patay/Team Buhay tarpaulin was a collective expression of the truth that the RH law was a clear defiance and insult to God.

“Infringing on the right to life is an infringement on all other rights,” Navarra said.

Seven senatorial candidates were tagged by the diocese as members of Team Patay for voting in favor of RH law.

But two of the three Catholic dioceses in Negros Occidental will not put up Team Patay/Team Buhay tarpaulins in their churches.

While they support the cause of the Diocese of Bacolod against the RH law, Fr. Edwin Laude, Social Action Center director of the Diocese of San Carlos, said they had yet to get a consensus from the clergy in their diocese on the education campaign they would adopt.

But definitely, they will not use the Team Patay/Team Buhay title because it is divisive, Laude told the Inquirer.

He added that they would just list down the names of those who voted against and for the RH law to inform the faithful.

Leave it up to faithful

Fr. Eryl Agus, Diocese of Kabankalan social action director, also said they would not be putting up similar tarpaulins because they did not want it to appear that they were imposing on the faithful.

Instead, they have disseminated information on candidates who are pro and antilife to their leaders in the parishes of the Diocese of Kabankalan as it is the consensus of the clergy to leave it to the faithful to decide whom to vote for, based on that information, Agus said.

But he stressed that, like the Diocese of Bacolod, they are against the RH law.