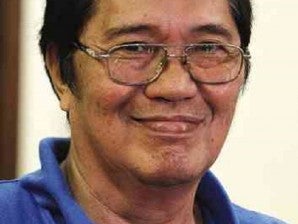 As a somewhat restless young man, Baldomero Falcone was forced into a seminary by his grandmother in the hope of shepherding him into a life of quiet priesthood.

“My lola could not discipline me so she sent me to the seminary. But I never found the vocation to become a man of the cloth,” said the 68-year-old candidate for senator of the newly accredited Democratic Party of the Philippines (DPP).

“When I finished my AB in philosophy, I told my superiors, ‘Sorry, I’ve been praying but [priesthood] has not rubbed off on me.’ So I went abroad. I learned new skills,” he said.

Falcone became an entrepreneur, specializing in securitization and venturing into a number of businesses. He now holds top posts in two companies, one involved in land reclamation in Cebu and the other providing job placements for retired military officers.

He is also executive director of Sagip Bansa Filipinas Foundation Inc., a nongovernment organization dedicated to helping the poor, especially corn, rice and coconut farmers, indigenous people and the jobless.

Falcone now wants to add another job to his curriculum vitae—that of senator.

Although he has no previous experience in public office except for an unsuccessful run for vice president in 2010 (he was disqualified), Falcone believes he holds the right answers to the ills and troubles facing the Philippines today.

His solution will start with the abolition of the pork barrel system, the corruption-tainted practice under which legislators appropriate government spending for projects of their choosing, intended to benefit their constituents in return for their political support and their votes.

The businessman said the first thing he would do once elected to the Senate would be to file a bill eliminating the pork barrel, or the priority development assistance fund (PDAF) for legislators, and allocating the money as equity capital for housing projects for the urban poor.

“Just compute this. Every senator gets P267 million per year while every congressman has P70 million per year. That amounts to more than P50 billion. I’m not saying everybody’s pocketing it. But I’m saying it is very easy to pocket it,” he said.

Under Falcone’s proposal, the money that would otherwise go to the pork barrel, which members of Congress use to fund their pet projects, would go to securitization.

Securitization is the financial practice of pooling certain types of financial assets, such as mortgages or credit card debt, and repackaging the consolidated debt as bonds or interest-bearing securities to various investors. The principal and interest payments on the debt underlying the securities are paid back to the investors or purchasers of the new financial instrument.

Falcone proposes that the pork barrel funds be pooled together and turned into securities, the interest of which will be used to provide loans to the poor under mechanisms that “are not dependent on real estate capital.”

The idea is to provide credit to ordinary Filipinos without requiring land titles as collateral.

“If you don’t have real estate collateral, you can’t take out a loan… We have to find a way such that credit is liberalized. With securitization, we won’t be too dependent on real estate,” he said.

“Credit should be made available to ordinary Filipinos with good character through good viable projects that can give them a chance to improve their lot in life,” Falcone said.

Falcone said the abolition of the pork barrel system would naturally lead to the eradication of another evil in Philippine society—political dynasties.

The connection is quite obvious, he said.

“If you are a family enjoying more than P200 million per year, don’t tell me you will not be tempted to continue and pass your position on to your offspring so that enjoyment will continue,” he said.

Falcone said roughly “70 percent” of those in power in the Philippines belonged to political dynasties. “We have the same names, same faces but no change. That is why so many of our countrymen are losing hope,” he said.

In the midterm elections, Falcone said the voting public must look for honesty in the candidates, as well as the “ability to raise the liquidity position of the country and the skills to provide the executive department a road map to get this country out of poverty.”

Born on Sept. 19, 1944, in Hindang, Leyte, Falcone is the son of a former judge and a schoolteacher. Growing up in a small town where he had to walk 4 kilometers everyday to school, he said it was always his dream to be a leader.

“I remember when I was a kid in the barrio, my mother gave me a big attache case and whenever I rode the tartanilla (horse cart), people were saying this guy is going to be somebody someday,” he said. He is married to Alice L. Falcone, with whom he has four sons.

He is the president of Millennium Industrial Commercial Corp., a company involved in the reclamation of a 400-hectare fish pond in Cebu City, as well as the construction of a toll bridge connecting the city hall to the reclaimed land.

He is also vice president of Global Interphase Security Services Provider, a firm that provides foreign and local assignments to retired officers.

As executive director of Sagip Bansa Filipinas Foundation Inc., Falcone works to provide jobs and low-cost housing to city squatters. “We want to clear Metro Manila of informal settlers and make it beautiful again. On the other hand, we want to give the informal settlers a second chance,” he said.

He wrote the book “Christian Economics: The Philippines’ Developmental Ideology,” which advances the idea of providing government support to cooperatives.

“In Europe, most of the bigger institutions are cooperatives. Here we have yet to see a financial cooperative really grow big because there’s no encouragement from the government, no financial support,” he said.

Imagine if SM malls were owned by a cooperative, he said. “A lot of Filipinos would be happy,” he said.

Falcone is running under the DPP, a political party founded in 2010 by Dr. Ernesto G. Ramos and which seeks to be an alternative to traditional politics. Along with two other party members, he ran for vice president in the 2010 elections but was disqualified for having no political track record.

“The party has absolutely no funds. But we are the fastest growing party in the sense that we give lifetime membership to members for a minimum of P100. We are now 200,000 and still going strong,” he said.

Falcone is not discouraged by his party’s lack of popularity. “We don’t believe in surveys, which are just one way of conditioning. We will try our best and leave it to God and the people,” he said.

His wish for the Philippines is that “one day, all Filipinos will be able to eat three times a day.”

“We do not need them to arrive at some wealth but at some sufficiency to practice their creativity, to practice their beautiful culture and to show the world that Filipinos know how to celebrate life and accept God as the center of their lives,” said Falcone.

Read Next
A most content ‘Uhaw’ member
EDITORS' PICK
Experience clearer calls nationwide with Smart VoLTE
UP law prof Ryan Oliva missing; family cries for help
After weeks of delay, formal transition of power to Biden begins
Public warned against use of fake CopperMask
‘I believe I can win’: Hidilyn Diaz all eyes on Olympic gold
Working from home can be smooth and manageable if you master these tips
MOST READ
UP law prof Ryan Oliva missing; family cries for help
Zia Dantes ‘kilig’ after receiving birthday greetings from idol Sarah G, YouTube stars
Viral dog caught lying inside Taguig mall joins establishment’s security team
Is Duterte willing to work with Robredo? Maybe it’s time for VP to take initiative – Palace
Don't miss out on the latest news and information.