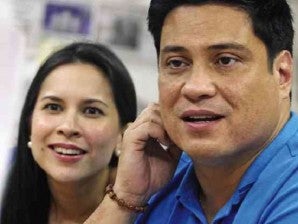 The macho image notwithstanding, karate and arnis black belter former Rep. Juan Miguel Zubiri is a softy when it comes to his kumander—wife of seven years Audrey.

“I’m a member of the Union of Husbands Afraid of Wives (Uhaw),” Zubiri told INQUIRER editors and reporters, a remark that prompted laughter from his wife.

Perhaps like many Filipino husbands, the 43-year-old senatorial candidate of the United Nationalist Alliance bows to his better half—his staunchest campaigner in his bid to return to the chamber he left in a painful yet proud decision almost two years ago.

“She’s the rock of my foundation,” Zubiri said of Audrey, a television personality and model he married in 2005. “She plays a key role. She even speaks better than me. When she’s on stage, she has more fans.”

Rivaling the filled folio of her husband, the 30-year-old mother of two has a schedule of her own, with campaign engagements around the country in the hope of bringing Zubiri back to the Senate.

This is on top of attending to her real estate business, writing a regular column for the lifestyle section of the INQUIRER, supporting an advocacy for family and children and looking after her own kids—Adriana, 3, and Juanmi, 2.

In just the first half of this month, Audrey was to speak in La Union, Manila, Davao, Pangasinan and Palawan.

“Usually, I personalize it to whatever place I am in,” said the Narvacan, Ilocos Sur, native. “For example, if I’m in the Ilocos region, I tell them what Miguel has done for them because he’s had a lot of projects in the last four years. I tell them how he’s connected to me being Ilocano.”

“It’s funny, when I speak Ilocano, they still talk to me in Tagalog or English. So I answer in Ilocano. But then they still speak to me in English or Tagalog. And maybe the third or fourth time, it finally dawns on them that I’m actually speaking in Ilocano. And they get shocked—how?”  Audrey said, smiling broadly.

In all her encounters, it’s always the women who show their adoration the most.

“Always they come up, they hug me, they kiss me and then they tell me, ‘We will vote for Migz because of what he did (referring to his resignation).’ But sometimes they get dramatic, they tell me, ‘I cried when your husband resigned, why did he resign?’ Things like that,” she said.

Zubiri resigned in August 2011 amid allegations of cheating in the 2007 midterm elections, “the proudest moment” of his life that paved the way for Sen. Aquilino “Kiko” Pimentel III to ascend to the chamber. Zubiri maintains he had no hand in the fraud.

He regards Audrey and his children as the central figures in his political and personal life, inspiring him to include the makapamilya (family-oriented) in his campaign pitch.

“It’s all about family values,” Zubiri said. “That’s why in my commercial, I put makapamilya. I mean, if all these [cheating allegations] were true [and] I’m an indecent person with other alternative lifestyles, would I be happily married with my wife and actively involved in raising our two children? I always say charity begins at home.”

The couple brushed off old rumors about the former senator’s sexual preference, which amused Audrey the most.

“Ask my wife. She seems so satisfied!” Zubiri said, grinning.

Audrey seconded: “We have two wonderful children. I am very happy with my husband.”

“You know the funny thing is, it’s either they say he’s gay or something else, that he’s babaero (womanizer). It’s just funny, they can’t seem to make up their minds,” she said, laughing.

The couple is, in fact, planning for another baby.

He repeatedly spoke about missing his two children while busy in the campaign.

In the end, he said, while he is devoted to public service, “it’s not my life or the reason why I live.”