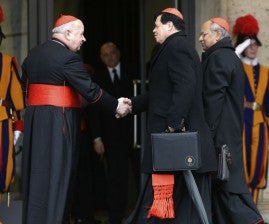 Cardinal Norberto Rivera Carrera, center, followed by Cardinal Albert Malcolm Ranjith Patabendige Don, right, greets Cardinal Stanislaw Dziwisz, as they arrive for a meeting at the Vatican, Friday, March 8, 2013. Cardinals have set Tuesday as the start date for the conclave to elect the next pope, signaling that they were wrapping up a week of discussions about the problems of the church and who best among them might lead it. AP Photo/Alessandra Tarantino

VATICAN CITY– Vatican workers made final preparations in the Sistine Chapel on Saturday after Roman Catholic cardinals voted to begin their conclave to elect a new pope under Michelangelo’s famous frescoes next week.

The conclave of 115 “cardinal electors” will begin on Tuesday to choose the 264th pope, following Benedict XVI’s abrupt decision to resign last month after a troubled eight-year papacy that was often overshadowed by scandals.

The 85-year-old Benedict admitted he was becoming too weak in body and mind to keep up with a fast-changing modern world and became only the second head of the Roman Catholic Church ever to resign by choice in its 2,000-year history.

The decision on the date of the conclave was taken on Friday at one of a series of closed-door meetings held by cardinals over the past week to discuss the many challenges facing the next pope.

Cardinals seized on the rare chance to air grievances against the Vatican with no new pope to defer to and no old pope to mourn.

Several cardinals have called for greater transparency and a wholesale reform of the Roman Curia, the central governing body of the Church, which has been under a cloud over recent corruption, infighting and intrigue allegations.

“Pope emeritus” Benedict XVI has stayed out of the debate and is living at the papal summer residence of Castel Gandolfo outside Rome for the next couple of months, after which he will move to a former convent inside the Vatican.

No spying, no communication

The giant window of the Sistine Chapel has been blacked out to prevent anyone being able to spy on the conclave and scrambling devices have been installed to prevent any type of communication with the outside world.

The Renaissance jewel takes its name from pope Sixtus IV, who had it built between 1477 and 1480. Situated next to St. Peter’s Basilica, it has the same dimensions as the first Holy Temple built in Jerusalem by king Solomon.

One of the most visited sites in the world, with up to 20,000 tourists a day filing through, the Sistine Chapel features one of art history’s most famous scenes, depicting God stretching out his arm to touch Adam’s hand and give him life.

The chapel is now off limits to visitors and the Floreria, the Vatican department in charge of preparing for papal audiences and ceremonies, has been outfitting it for the conclave with a raised platform and tables.

It is using drawings and photos to make sure this conclave — the 24th to be held in the chapel — is the mirror image of the previous ones.

Twelve long tables will be laid out in four rows, two on either side of the chapel, covered with runners in beige with bordeaux satin skirting.

The cardinals — traditionally known as “Princes of the Church” — will sit on cherry-wood chairs to fill in their ballot papers in the papal election.

Folded votes will first be placed on a bronze plate, known as a paten, and then slid into an urn shaped like a flying saucer, decorated with two lambs, signifying the flock of God’s faithful who will be led by the future pope.

Prayers will be read out from a lectern in the centre of the chapel.

On the left of the entrance to the chapel, two stoves with one common flue have been installed for the burning of the votes once they have been counted.

Ballots will be burnt in one of the stoves, engraved with the names of the last six popes and the dates they were elected. Chemicals burnt in the second stove will ensure the colour of the smoke in the sky cannot be misread.

Black smoke will mean no decision has yet been made, white smoke signals a pope has been chosen. There are two daily rounds of voting and the pope is elected by a two-thirds majority and a simple acceptance of the vote.

At the end of the chapel, tucked away and permanently off-limits to tourists, is a small door which opens onto a small cell, where the white robes for the new pope will be laid ready in three sizes: large, medium and small.

The small, red-painted “Room of Tears” is where the chosen cardinal will retire once nominated to be the next head of the world’s 1.2 billion Catholics.

Preparations are also under way at the Casa Santa Marta, the residence inside the Vatican where the electors will eat and sleep between votes.

Cardinals will walk or be driven about 500 meters (yards) up a cobblestone road that passes through the lush greenery of the Vatican gardens.

The windows in the residence are locked and the cardinals’ movements are restricted to prevent anyone signalling details about the election.

Even the telephones in the rooms are for internal use only.