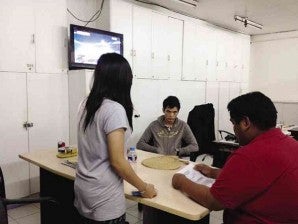 ARNO Fuchs a.k.a. actor Arno Morales (center) is confronted by his former girlfriend at the NBI headquarters following his arrest on Friday.

Another sex video, another storm-tossed pair.

A former talent of ABS-CBN was arrested at his Quezon City residence Friday morning for allegedly posting his sex video with his former girlfriend on YouTube.

Agents of the National Bureau of Investigation arrested 20-year-old Arno Fuchs of Blueridge, Quezon City, on a warrant issued by Pasig City Judge Cesar Sulit for alleged violation of the Anti-Photo and Video Voyeurism Act and the law on violence against women and children.

Speaking to reporters while in detention, Fuchs—also known as Arno Morales onscreen—confirmed that making that video was “our idea” but strongly denied leaking it on the Internet.

He said his Blackberry phone which contained a copy of the video got lost “during a party in January,” suggesting that whoever found that phone must be the culprit.

Later on Friday, in the presence of their respective family members, the former sweethearts had an emotional confrontation at the NBI.

The complainant, a 17-year-old college student, said Fuchs was her boyfriend for three years and that she broke up with him in January.

“He has no right to do this. We were together for so long. Why did he do this to me? I want him punished for what he did,” she later told reporters.

She said she was forced to quit her studies after being informed by the school management that it had received a copy of the video through e-mail.

The mail reached the school officials from her own e-mail address—which can be accessed using a password that she earlier shared with Fuchs, she said.

“I trusted him. Once, he had my cell phone which contained all my passwords. I didn’t care because we were together. He started making threats that he would expose everything after I refused to reconcile with him,” she said.

But Fuchs maintained: “Making the video was our idea. We talked about it, but my Blackberry phone got lost in an open party last January and it contained (the) video.”

Palmer Mallari, head of the NBI-Technical Investigation Division (TID), said Fuchs was placed under surveillance for weeks prior to Friday’s arrest.

The TID is the same NBI unit that worked on another sex-video case involving celebrities in 2009, the one showing model Hayden Kho and some female partners in show biz.

Palmeri said the arresting team, who had also secured a search warrant, seized a laptop and other gadgets from Fuchs which will be subject to scrutiny.

An initial investigation showed that “the video (uploaded) on YouTube was the same video found in his laptop. Possession of such footage is already a violation of the antivoyeurism law,” the official said.

Fuchs was introduced to show biz by ABS-CBN in 2007 as part of Star Magic Batch 15. The half-German actor starred in the now-defunct youth oriented TV show “Star Magic Presents: Abt Ur Luv” that year and later landed small roles in the movie “A Very Special Love (2008)” and “You Changed My Life” (2009).

According to a spokesperson for Star Magic, ABS-CBN’s talent management arm, Fuchs is no longer a talent of the network. “He’s been inactive in show biz for quite some time now, as far as I know,” Star Magic public relations head Thess Gubi told the Inquirer on Friday.

However, a source said Fuchs is part of an upcoming Star Cinema production, a romantic-comedy titled “It Takes a Man and a Woman,” where he plays the younger brother of lead star Sarah Geronimo. With a report from Allan Policarpio, Entertainment