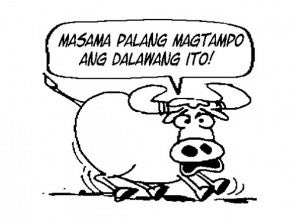 DAVAO CITY—Not just a tiny crack but a serious fracture.

This is what has emerged in the relationship between former President Joseph Estrada and his godchild, reelectionist Sen. Francis Escudero, after the United Nationalist Alliance (UNA) dropped Escudero from its Senate lineup.

Escudero told reporters on Wednesday night he had received word his godfather was now campaigning against him. While he acknowledged that Estrada had the right to support the candidates he preferred, Escudero issued a subtle warning in Filipino about not simply taking the matter lying down.

Escudero also noted that Estrada had yet to make good on his promise made in the media to continue campaigning for Grace Poe after she was kicked out of UNA’s Senate list.

Poe, however, told reporters she was already thankful that Estrada had not issued any statement against her and that he even described her as “inaanak ko (my goddaughter).”

“For me, that is already enough,” Poe said.

No time for Chiz

The 75-year-old Estrada on Thursday took offense at Escudero’s claim that he was campaigning against the senator.

“I don’t even mention his name during sorties so how could I campaign against him? I have no time for him,” Estrada said in Filipino in a phone interview.

Estrada, who said he was preoccupied with his own mayoral campaign in Manila, pressed on: “Maybe he just wants to win attention (sumikat) and so he tries to ruin my name.”

Estrada challenged Escudero to identify the source of his information. “He should name names,” he said.

Estrada said Escudero might have felt bad when he announced that he would still campaign for Poe “in my personal capacity” even if UNA had dropped her.

Rumors of strained relations between the two men started even before UNA announced it was dropping Escudero, along with former movie classification chairperson Poe and Sen. Loren Legarda, from its Senate slate.

Before the announcement, UNA spokesman Rep. Tobias Tiangco had warned that the alliance was displeased with the three candidates’ refusal to join its campaign sorties.

Escudero, Poe and Legarda are official candidates of the administration’s Team PNoy. UNA, however, had adopted them as guest candidates given their close ties with stalwarts in UNA.

“While I recognize that he is within his rights and I continue to respect him, we cannot just take it lying down (hindi naman puwede kaming humiga lamang at hindi gumalaw at tanggapin na lang iyon),” he added.

“Each one of us has his strategy (diskarte) as far as the campaign is concerned. We will do what we need to do, especially when we hear news like that,” Escudero said.

His statement was seen in some quarters as a mild warning about possible retaliation. Escudero, however, would not make any categorical statement about this.

Escudero said he was “saddened” and “surprised” when UNA announced the deletion of the three guest candidates from its slate.

“We understood that we could not make demands but if the (UNA stalwarts) really wanted to retain us in the lineup, they can always find a reason to do so,” he said. “If they don’t want us there, they can also issue reasons, no matter how shallow these are.”

Escudero mentioned Estrada and Vice President Jejomar Binay—who received a boost in his 2010 campaign following Escudero’s endorsement—as among the supposed Three Kings who could easily influence decisions within UNA.

“I think that’s the reason why they are called ‘kings.’ You do not leave important decisions to the minions,” the senator said.

The strain between Estrada and Escudero apparently goes back to the campaign for the 2010 presidential election.

Estrada recalled he had initially invited Escudero to be his running mate but the senator rejected the proposal and supposedly told him, “It’s the presidency or nothing.”

Estrada said he then tapped Binay to take Escudero’s place but Escudero supposedly came back to him and said he was accepting the offer.

Estrada said this was after Escudero failed to get the backing of former Ambassador Eduardo “Danding” Cojuangco of the Nationalist People’s Coalition.

“By that time, I could no longer accommodate him because I had given my word to Mayor Binay,” Estrada said. “If I were a shrewd politician, I could have dropped Binay and just told him to run for senator. But I have word of honor.”

Escudero ended up supporting then Sen. Benigno Aquino for president and Binay for vice president.