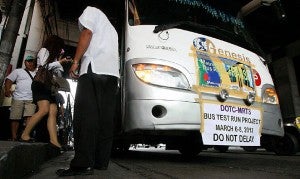 Five airconditioned MRT buses are deployed along EDSA to lessen the number of people riding the MRT from 6am to 9am in the morning, however it has already gathered complaints from commuters since the main reason they ride the MRTs is to avoid heavy traffic specially when riding public buses along Edsa. CONTRIBUTED PHOTO

MANILA, Philippines—The Metro Rail Transit’s  test run of a “bus link project” got off to a rough start on Wednesday as three of their five chartered buses were apprehended by the Metropolitan Manila Development Authority.

On Wednesday, the MRT management started the deployment of five Manila Genesis Charters and Tours Inc. buses to decongest the morning rush at the North Avenue train station and lessen the kilometric queues of riders.

But due to a lack of coordination with the MMDA, the southbound buses caused their passengers more hassle than convenience on the pilot day. Three of the five buses were stopped and ticketed for illegally passing the under overpasses. Tarpaulin sheets on their fronts bearing the markings:  DOTC-MRT3 “Do not delay” did not help at all.

The passengers, who used train cards to get on the buses, were to be ferried to MRT stations on Ayala, Magallanes and Taft.

But on Wednesday, after the licenses of the drivers were confiscated by traffic enforcers and the MRT buses forced to face the usual EDSA traffic like the rest of the city’s buses, some disgusted passengers chose to get off at subsequent MRT stations and take their chances with the trains. All the buses, however, were allowed to continue plying their routes for the day.

The MRT management had envisioned their buses as an express service, exempted from regulations governing regular buses such as the ban on passing through underpasses and the strict use of the yellow bus lanes.

Wednesday saw the start of a three-day dry run for the MRT bus line, which will run from 7 to 10 a.m. until Friday, with 15-minute intervals between bus trips. The dry-run is meant to gauge the public reception and the service’s effectiveness.

The MMDA, however, has not issued exemption permits for the dry run.

MMDA Chairman Francis Tolentino told reporters on Wednesday that no prior coordination was done with his office. He said he learned about the project only on Tuesday. “It was so abrupt,” he added.

“We support the MRT in helping find ways to alleviate the plight of the passengers, but buses are not part of the MRT’s mandate. If they deploy buses, they have to comply with the rules,” Tolentino said.

MRT management” should properly coordinate and conduct more studies. The city bus operators might complain of the exemption and might decide to follow suit,” Tolentino warned, adding that current MMDA bus routes and deployment and dispatching systems took months of consultations before they were tested.

He said he will discuss with MRT general-manager Al Vitangcol III the possibility of a “toned down” version of the bus link project. Tolentino also arranged for the participation of bus operators in their meeting on Wednesday afternoon.

In a letter dated March 5 showed that the Department of Transportation and Communications, the mother agency of the MRT, did not fully endorse the MRT’s partnership with Genesis.

“The DOTC is not in a position to endorse a specific entity [Genesis] for the issuance of a special permit,” read the letter sent by Transportation Assistant Secretary Jaime Raphael Feliciano to Vitangcol, a copy of which was furnished to the media.

The letter said the MRTA “may continue with the dry run or pilot of the project” as long as it “ensures that it complies with existing laws and regulations.”

But the letter also warned: “We wish to inform you that, currently, there is a directive from the Office of the President to reduce the number of buses plying Edsa, not add to the existing number.”