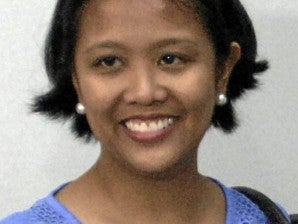 MANILA, Philippines—Senatorial candidate Nancy Binay fears that political operators will escalate their attack on her father, Vice President Jejomar Binay, to bring her down in the surveys in the run-up to the elections in May.

While thankful for her strong showing in the latest Social Weather Station (SWS) survey, the United Nationalist Alliance candidate said she is hurt critics are attacking her father, who is not even a candidate in the election.

“I hope they will just allow us to talk to the people about issues. Please don’t hit my father just to bring me down in the surveys. I hope they’ll stop their mudslinging on my parents. They’re not the candidates,” she said in a press statement.

Binay, who is the Vice President’s eldest daughter, is concerned by the resurgence of mudslinging and personal attacks, especially against her father.

“As a daughter, I am hurt that they’re doing this to my father,” she said.

The Vice President has the highest trust and approval rating among government officials, she said, but the attacks against him escalated after her inclusion in the Senate ticket of UNA. She has stayed in the top 12 in the surveys, taking the No. 7 spot in the latest SWS survey.

She noted that other UNA leaders like former President Joseph Estrada and Senate President Juan Ponce Enrile were being attacked in an attempt to bring down the ratings of UNA candidates.

While still in the winning circle, she said much work remains to be done.

“I am very grateful for the support. For me personally, the surveys serve as a guide for planning. The true test of support for a candidate is the turnout and the reception given to us during our sorties to the provinces. And so far, UNA has garnered large crowds wherever we go, despite the warning given to local officials not to host us when we visit,” she said.