H for Honasan, C for Corona, other Team PNoy bloopers 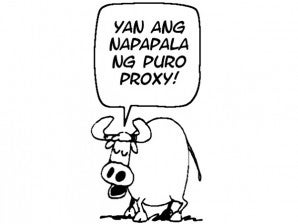 Sen. Franklin Drilon was introducing to students of Bukidnon State University (BSU) the administration coalition’s new acronym, “TEAM LP CHAMP,” which stands for the first letters of the surnames of all Malacañang-backed senatorial candidates.

“Corona,” the people shouted back, referring to ousted Chief Justice Renato Corona whom the Senate convicted in an impeachment trial last year.

“And whose surname starts with an H?” Drilon followed up, referring to former Akbayan Rep. Risa Hontiveros, who is also running under the Team PNoy ticket.

This is the trouble when candidates send proxies in their place; or worse, do not bother to show up at all at provincial sorties of the administration coalition.

As expected, they lacked the name recall that candidates who showed up gained as an advantage, or their proxies committed bloopers worthy of a YouTube posting.

In a symposium at the BSU gym, actress Sheryl Cruz, standing in for cousin Grace Poe, reminded voters that her “manang” used to chair the MTRCB.

“Do you know what MTRCB stands for?” Cruz asked the students.

Reelectionist Sen. Aquilino “Koko” Pimentel doused expectations of high drama with his absence at the gym.

Pimentel’s appearance was highly anticipated since he replaced Bukidnon’s homegrown son Juan Miguel Zubiri as the real 12th placer in the 2007 senatorial election via a decision of the Senate Electoral Tribunal.

Kibitzers would have wanted to witness how Pimentel would conduct himself and how the hometown crowd would respond to his presence in the symposium.

The senator sent in his place first cousin Astravel Pimentel-Naic, who told reporters that he was in the Senate chairing a hearing on the electoral reform committee, “along with Senator Cayetano.”

Cayetano was also not at the BSU gym.

But a check with the Senate website showed there was no hearing scheduled on Wednesday by the electoral reform panel.

Pimentel’s staff later corrected Naic’s statement, saying the senator was at the GMA 7 studios for an interview.

Apart from Naic, Pimentel also sent his mother, Bing, and sister Gwen to proxy for him in rallies of the administration ticket such as the one held on Tuesday in Alubijid, Misamis Oriental, where only Sen. Loren Legarda, Hontiveros, former Sen. Ramon Magsaysay Jr. and Benigno “Bam” Aquino were present.

Sen. Francis Escudero may not be lacking in voters and fans but those who were expecting him to attend an LP-led sortie in Laguna on Valentine’s Day two weeks back had to content themselves with the knowledge that he would enjoy the occasion with girlfriend Heart Evangelista.

But before this detail was known, the audience at San Pablo National High School gym shrieked as his name was called, only to be shown a video of his campaign advertisement.

Drilon said some candidates had made commitments to other invitations before the senatorial campaign began on Feb. 12.

Cayetano, for example, has been busy the past two weeks with his PiTiK (Presyo, Kita, Trabaho) consultations with grass-roots workers, like tricycle drivers and vendors.

“Alan told me he fixed his schedule for the past two weeks. I am confident he will be with us in future sorties,” Drilon said in an impromptu news conference.

Drilon said there were cases when administration candidates had made commitments that could no longer be withdrawn.

Such had been the case with Sen. Antonio Trillanes IV and Legarda.

The staff of Trillanes even announces via e-mail the reelectionist senator’s sorties outside of those arranged by Drilon.

“It’s really difficult to complete the slate. But you saw how warm the reception was here in BSU. I was pleasantly surprised. We will relay to them what happened and hopefully … it would certainly help if they showed up,” Drilon said.

Observers note that physical presence could be more important now if the administration ticket wants to sustain its 9-3 dominance in the Senate race.

A quick inspection of the gym showed that apart from the three, only Trillanes, Pimentel, Escudero and Angara sent people to put up tarpaulins and campaign posters.

Drilon said Angara was supposed to join them on Wednesday from Zamboanga City “but he wasn’t feeling well and returned to Manila.”

Drilon added that unlike UNA spokesman Rep. Tobias Tiangco, he would not issue threats against prodigal candidates who failed to attend Team PNoy sorties.

“I am only the campaign manager. We do not issue warnings. We appeal. Walang ilalaglag (No one will be dropped),” he said, referring to UNA’s recent move to drop Escudero, Poe and Legarda as guest candidates for failure to show up in the opposition’s senatorial sorties.

Drilon said he had requested Legarda and Escudero to be present in more rallies to campaign for the other candidates “since they were already sure winners.”

As he left the BSU campus, Aquino said he acted as stand-in during the 1986 presidential campaign of his aunt, the late President Corazon Aquino, and again in 2010 for President Aquino in some rallies.

So, does sending a proxy help?

“A person’s physical presence is always important. The success of a proxy depends on whether he is able to relay the message that the candidate wants to convey,” Aquino said.

Madrigal said her presence had no equivalent as far as the campaign was concerned.