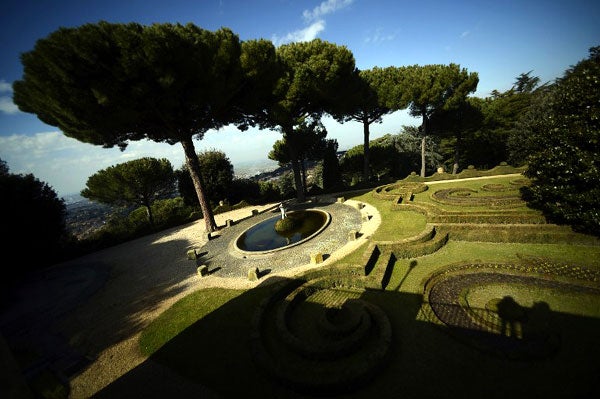 A view taken on February 20, 2013 shows the Pontiff’s gardens of the Apostolic Palace of Castel Gandolfo, Italy. Pope Benedict XVI will stay at the Vatican’s summer residence from February 28 until the convent of Mater Ecclesiae (Mother of the Church) at the Vatican will be ready to host him. Pope Benedict XVI began a week-long spiritual retreat out of the public eye on February 18 ahead of his resignation on February 28 with the field of candidates to succeed him still wide open AFP PHOTO / FILIPPO MONTEFORTE

CASTEL GANDOLFO, Italy— Once he steps down on Thursday, Pope Benedict XVI will begin his retirement in the papal summer residence at Castel Gandolfo, a sumptuous villa outside Rome with ornamental gardens, breathtaking views and its own farm.

Benedict will spend around two months in the palace, which is perched high on a rocky outcrop above Italy’s Lake Albano, before withdrawing to a monastery within the grounds of the Vatican.

The villa and gardens, owned by the Holy See since 1956, expanded over the centuries to include other properties and now sprawl over 55 hectares, making the site some 11 hectares bigger than the Vatican, the world’s smallest state.

One wing of the palace looks out onto the main square of Castel Gandolfo, a medieval town listed among Italy’s most beautiful, and it is from one of those windows that Benedict will wave goodbye just before resigning on Thursday and retreating to a life of prayer and academic research out of the public eye.

Inside the grounds, there are views down to the lake or glimpses of the sea beyond gardens decorated with sculptures, with orchards of apricot and peach trees and greenhouses of ornamental flowers.

The residence has long been a favorite with popes hoping to escape the infernal heat of a Roman summer and, at 426 meters above sea level, the palace is a cool oasis.

“The pope, who usually visits at Easter, has brought his stay forward by a month,” said Saverio Petrillo, director of the Pontifical Villas.

“The situation is routine in terms of logistics, but exceptional considering the circumstances,” he said.

Benedict’s resignation “took us by surprise, it was like a lightning bolt out of the blue,” said the white-haired Petrillo, who said he understood the pope’s decision to give up the papacy.

“Here the pope will find a family atmosphere. There are no great works of art, no huge rooms,” he said as he showed off reception rooms decorated with simple wooden crosses, bibles on tables and photographs of Benedict smiling as he walks through the palace grounds.

Cypresses and sculptured hedges line secluded paths in the gardens, but Benedict does not often stroll among the blooming flowerbeds or fountains, Petrillo said.

“He is a reserved man of study who is not a huge fan of the great outdoors.”

Benedict will be accompanied by two private secretaries and four lay women and is expected to spend most of his time in his private apartment, which has a view of the sea.

The pontiff said in 2011 that at Castel Gandolfo, “I find everything: a mountain, a lake, I even see the sea,” a phrase immortalized in a plaque on the town hall opposite the palace.

It was pope Urban VIII who first decided in 1626 to establish the papal summer residence in Castel Gandolfo, which is 30 kilometers from Rome and also houses the large telescope of the Vatican’s Observatory.

Centuries later, after several other villas had been incorporated into the land, pope Pius XI opened a farm, which includes cows, hens, cockerels and pontifical bees.

Read Next
SC grants Panganiban’s request to have full retirement benefits
EDITORS' PICK
Omicron: What science knows so far about latest Greek-lettered COVID variant
Legarda: Ending Violence Against Women, a cause for all
This new condo in the South will make you want to turn a new leaf
Smart offers wireless fiber-like speeds to Filipino homes with country’s first 5G Prepaid Home WiFi
DOH: Booster doses for fully vaxxed adults to start December 3
NGCP transmission tower in Lanao del Sur bombed
MOST READ
‘Maski na hindi ‘yung mga bright’: Duterte urges public to elect new leaders
Pacquiao to voters: If you can’t vote for me, then don’t vote for a corrupt candidate
Roque defends Bongbong Marcos: ‘He was only 15 years old in 1972’
Another disqualification petition filed against Bongbong Marcos
Don't miss out on the latest news and information.