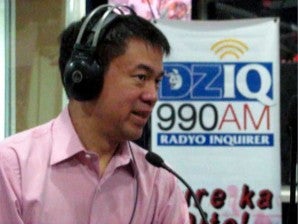 MALAYBALAY CITY — Kibitzers were sorely disappointed when reelectionist Senator Aquilino “Koko” Pimentel failed to appear in a rally of Team PNoy senatorial candidates inside the gym of the Bukidnon State University this Wednesday morning.

It will be recalled that the Senate Electoral Tribunal declared Pimentel the true 12th placer in the 2007 Senate elections in August 2011, dislodging Bukidnon’s native son, Juan Miguel Zubiri.

Observers were anticipating how Pimentel would have conducted himself in Zubiri’s homefront and how the hometown crowd would have reacted to his presence.

Instead, Pimentel sent his paternal first cousin Astravel Pimentel-Naic to represent him in the rally.

Naic told reporters that the senator was in Manila to conduct a hearing of the Senate electoral reform committee which he chairs, along with another LP candidate, Senate minority leader Alan Peter Cayetano.

Cayetano was also absent from the LP rally in Bukidnon.

A check with the Senate’s website this morning showed that Pimentel’s committee did not schedule a hearing this Wednesday.