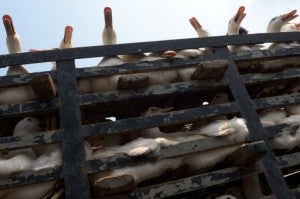 Ducks are transported on a pickup truck at a market in Phnom Penh on Feb. 8, 2013. A 35-year-old man has become Cambodia’s eighth bird flu fatality this year, prompting concern about the spread of the virus in the country, a health official said Tuesday, Feb. 26, 2013. AFP PHOTO/TANG CHHIN SOTHY

PHNOM PENH—A 35-year-old man has become Cambodia’s eighth bird flu fatality this year, prompting concern about the spread of the virus in the country, a health official said Tuesday.

The latest victim, from the northeastern province of Kampong Cham, died on Monday night from the H5N1 virus in a Phnom Penh hospital, said Ly Sovann, deputy head of the health ministry’s disease surveillance bureau.

He said the man had eaten two ducks which had previously died before he became sick earlier this month.

“We are really worried about the situation because in just two months we have nine cases of bird flu,” Ly Sovann told AFP.

Eight of the nine people died, along with thousands of birds in the villages where the victims lived.

“There was a lot of dead poultry, but the people did not report to (officials). In the villages that I went to, almost all poultry had died,” Ly Sovann said, adding it took up to a month for officials to be told of poultry deaths in some areas.

The health ministry has enhanced surveillance to try to detect and treat avian influenza cases in the early stages, he said.

“We are also worried about (possible) human-to-human transmission of bird flu, but it is not the case now,” said Ly Sovann.

He urged villagers immediately to report dead poultry and not to touch or eat the birds.

Sonny Krishnan, communications officer with the World Health Organization in Cambodia, said it was keeping “a close watch” on the situation. “The disease is still of limited transmitability from poultry to humans,” he said.

Cambodia has recorded 30 human cases of H5N1 since 2003, with all but three of them proving fatal.

The virus has killed more than 365 people worldwide since a major outbreak in 2003, according to WHO statistics.

It typically spreads from birds to humans through direct contact. But experts fear it could mutate into a form easily transmissible between humans, with the potential to trigger a pandemic.