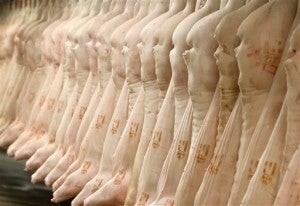 Animal carcasses hang from hooks at the Doly-Com abattoir, one of the two units checked by Romanian authorities in a growing scandal over horsemeat mislabeled as beef in processed foods, in the village of Roma, northern Romania, on Feb. 12, 2013. Unlike Europeans, South Africans do not unwittingly eat horse in their beef burgers and sausages, but they do eat donkey, water buffalo and goat according to a study by the Stellenbosch University. AP PHOTO/VADIM GHIRDA

JOHANNESBURG—Unlike Europeans, South Africans do not unwittingly eat horse in their beef burgers and sausages, but they do eat donkey, water buffalo and goat according to a study by the Stellenbosch University.

Over two thirds of meat products tested contained undeclared ingredients, according to a recent research study, prompted by revelations about food production in Europe.

“Our study confirms that the mislabeling of processed meats is commonplace in South Africa and not only violates food labeling regulations, but also poses economic, religious, ethical and health impacts,” said animal sciences professor Louw Hoffman.

“Unconventional species such as donkey, goat and water buffalo were also discovered in a number of products,” said Hoffman in a statement on the university website.

Up to 68 percent of 139 meat samples from shops and butcheries had irregular ingredients, the DNA-based study found, with pork and chicken most often substituted for other meat.

A lack of tough policing had facilitated the practice, said Hoffman.

“Even though we have local regulations that protect consumers from being sold falsely described or inferior foodstuffs, we need these measures to be appropriately enforced.”

A vast food scandal has erupted in Europe after horsemeat was found in so-called beef ready-made meals and burgers.

ADVERTISEMENT
Read Next
Love or hate him but Gordon tells it like it is
LATEST STORIES
World’s shortest man dies in Nepal at 27
Will Voigt to help Mighty, not fill Gilas’ coaching spot
School to fine parents for picking up their children late
‘Maman Dion,’ mother of singer Celine, dies at 92
Warrant for Odell Beckham Jr. rescinded in butt-swat case
MOST READ
End of his agony? SC rules in favor of Espinosa, orders promoter heirs to pay boxing legend
Marcosian mode: Duterte threatens to arrest water execs ‘one night’
OSG plea to revoke ABS-CBN franchise ‘a duplicitous move’ – Lacson
Missile-capable frigate BRP Jose Rizal inches closer to entering PH Navy’s fleet
Don't miss out on the latest news and information.