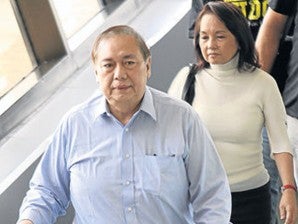 DOING A LACSON? Former First Gentleman Jose Miguel “Mike” Arroyo is in Hong Kong for a medical checkup, but there’s no record of him leaving the Philippines, say authorities. Photo taken on July 16 when he and his wife, former President Gloria Macapagal-Arroyo, arrived in Manila from Amsterdam. JESS YUSON

The Department of Justice (DoJ) on Thursday placed on the immigration watch list former First Gentleman Jose Miguel “Mike” Arroyo, who flew to Hong Kong on Sunday without being noticed by the Bureau of Immigration (BI).

Amid reports that Arroyo left for Hong Kong last Sunday, Justice Secretary Leila de Lima’s check with the Bureau of Immigration showed no record of the former first gentleman leaving the country.

“It was possible that he used a chartered or private plane,” De Lima said at a press conference.

De Lima said she was having this checked with the Civil Aviation Authority of the Philippines, which has records of chartered flights.

If it turned out that Arroyo had not left, then De Lima said his lawyers might be asked to “show proof” that he indeed was out of the country as they had claimed.

Nonetheless, De Lima was banking on the word of the lawyers that their client was abroad and would return to the country.

The committee is looking into allegations that Arroyo sold two of his used helicopters that were passed off as brand new to the Philippine National Police in 2009. The Senate has announced it will invite Arroyo to its next hearing on the helicopter controversy scheduled on Aug. 11.

The Bureau of Immigration received De Lima’s order at around 5 p.m. Thursday.

The watch list order is valid for 60 days unless terminated or extended, Mangrobang said in a text message.

Also placed on the immigration watch list was Rowena del Rosario, who was identified by Lionair Inc. owner Archibald Po at the blue ribbon committee as Arroyo’s secretary and the one who paid for the maintenance fees of the five Robinson helicopters Arroyo bought from Lionair.

Listed as Arroyo’s and Del Rosario’s address was LTA Building, which is owned by Arroyo’s family, on Perea Street in Makati City.

Po said the two used choppers sold to the PNP were among the helicopters Arroyo acquired for the campaign of his wife, then President Gloria Macapagal-Arroyo, in the 2004 presidential election.

Inocencio Ferrer, a lawyer of Arroyo, denied that the former President’s husband had owned the choppers and said that Arroyo’s name did not appear in any documents pertaining to the ownership of the helicopters.

Even if Arroyo is currently in Hong Kong, as claimed by his lawyer, the watch list will not be rendered “inutile,” De Lima said.

“Once he comes back, the airport authorities are duty bound to report about it to the Senate or the DOJ,” the justice secretary said.

Ferrer assured the public that his client would face the Senate probe, but a senator doubted that he would return from Hong Kong to appear before the blue ribbon committee.

“Mr. Arroyo will finish his medical checkup in Hong Kong this afternoon, then he will come home to confront these two witnesses,” Ferrer said in an interview on Radyo Inquirer.

“He will come back and face (the Senate probe),” Ferrer said. “I was authorized by Mr. Arroyo to assure you that he is coming back. His family is here. His wife is here. His grandchildren are here.”

At a news conference, Senate Minority Leader Alan Peter Cayetano said he believed Arroyo would “go TNT (tago nang tago) in Hong Kong” until the furor over his supposed involvement in the sale of two old choppers dies down.

Guingona said Arroyo would be “invited” to attend the panel’s third hearing on Aug. 11.

But Cayetano said Arroyo would just order his doctors to explain for him that he cannot come home due to the “medical examination” he is undergoing in Hong Kong.

“I’m just wondering, how come (Arroyo) always goes to St. Luke’s (Medical Center) whenever he has a medical emergency but a Senate hearing comes and he’s in Hong Kong,” Cayetano told reporters.

The senator noted that when Arroyo underwent open-heart surgery in 2007, the latter was praising St. Luke’s doctors to high heavens for taking good care of him.

“But why is it that when a Senate hearing is set, he has to go to Hong Kong to see a doctor? Sobrang tago mode,” Cayetano said.

Ferrer said Arroyo was not in hiding in Hong Kong and had no reason for him to do so.

“With due respect to Senator Guingona, Mr. Arroyo’s consultation with and treatment by his doctors/specialists in Hong Kong should not be considered an act of ‘fleeing,’ especially since Mr. Arroyo has not yet been invited or subpoenaed by the Senate,” Ferrer said.

Cayetano assured Arroyo that he had nothing to fear because the Senate was prepared to coordinate with his doctors to make sure the environment in the session hall and the decorum of his interrogators would not trigger a spike in his stress levels.

“I can assure him we will be gentlemen and the ladies would be proper when we ask questions,” he added.

Cayetano lamented that Arroyo and his lawyers had insisted that they would explain his role in the helicopter sale “in the proper venue or through legal processes.

“But the Senate investigation is part of the legal process and is a correct venue… They cannot keep dodging the ball. They have to be accountable,” he added.

The senator dismissed lawyer Ferrer’s denial that Lionair had maintained a fleet of five Robinson helicopters for Arroyo.

Po already told senators that Arroyo had asked for “blank deeds of sale” after completing payments for the helicopters in March 2004.

Cayetano, however, surmised that this was because Arroyo made sure not to leave a paper trail. “We never said (Arroyo) was stupid. There are allegations of corruption against the Arroyo family but not stupidity,” he added.

Unlike some senators, Malacañang was willing to give Arroyo the benefit of the doubt over his trip to Hong Kong.

“We have no reason to believe yet that the trip was undertaken for something else than what was released by their camp,” said deputy presidential spokesperson Abigail Valte.

Asked whether the Palace shared Cayetano’s view that Arroyo’s health problems and need for checkups come up whenever there was a Senate investigation against him, Valte said, “we noticed that also.”

Valte added that “given the gravity of the allegations, probably anyone will get sick because of these allegations.’’

Ferrer said he learned that Arroyo had left for Hong Kong when they talked over the phone on Sunday night. He said Arroyo was already in Hong Kong at that time.

Ferrer said Arroyo had planned to leave for a checkup in Hong Kong last week. He postponed his trip after his wife underwent a neck operation on Friday.

Ferrer said his client left for Hong Kong after the former President was released from St. Luke’s hospital in Global City.

He said he did not talk about Arroyo’s trip because “nobody asked me.”

De Lima said being placed on the immigration watch list was “not an injunction against leaving (the country) unlike a hold departure order.”

“However, anyone who is the subject of a watch list order must first seek a clearance before he or she can leave, justify that his travel is for a legitimate purpose and not for the purpose of evading the law,” De Lima said.

The DOJ will have to assess whether someone on the watch list would be allowed to leave the country.

“If one wants to leave for a vacation, unlike business purposes, or for a medical checkup, we would be a little more discerning,” she said.

In the case of Arroyo, De Lima said, the DOJ would have to coordinate with the Senate if he asks permission to leave while he is on the immigration watch list.

“If the Senate says we should not allow him to leave, then we have to concede to the Senate,” De Lima said. With reports from Cathy C. Yamsuan, Cynthia D. Balana and Christine O. Avendaño