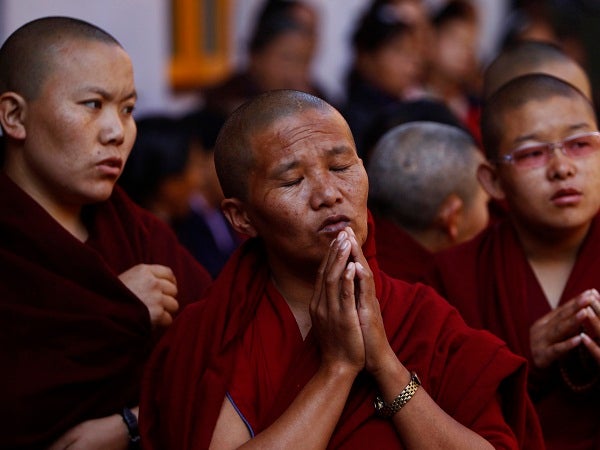 Exile Tibetan monks offer a prayer at a Tibetan Monastery near Boudhanath Stupa during the third day of Tibetan New Year in Katmandu, Nepal, Wednesday, Feb. 13, 2013. A Tibetan protester doused himself with gasoline and set himself on fire in Nepal’s capital Wednesday, the latest self-immolation to protest Chinese rule in Tibet. AP/Niranjan Shrestha

BEIJING—Two Tibetan monks in their early 20s set themselves on fire in protest against Chinese rule near dozens of pilgrims who had gathered for prayers to mark the end of the Tibetan New Year festival, a Tibet rights group said. Both died. A third monk was taken to a hospital after setting himself alight in a separate incident, another group reported. His condition and whereabouts weren’t immediately known.

The self-immolations bring the total reported since 2009 to 107.

One of the monks, Tsesung Kyab, self-immolated Monday outside a temple in Luqu county in northwestern Gansu province while the other, Phagmo Dundrup, set himself ablaze Sunday at a monastery in neighboring Qinghai province, the Washington, D.C.-based International Campaign for Tibet reported.

It said large numbers of religious pilgrims had gathered at both monasteries for prayer ceremonies to commemorate the end of the Tibetan new year festival, Losar. The group said it received images of the self-immolation in Luqu in which pilgrims watched as Tsesung Kyab burned.

The third monk, Sandhag, set himself on fire in the main street in the town of Aba in an ethnically Tibetan area of Sichuan province on Monday morning, according to London-based Free Tibet.

Police extinguished the flames and took Sandhag to a hospital, the group said. A resident of the local Dhupu monastery, he has since been moved to another unknown location, it said.

Last week, two Tibetan teenagers set themselves on fire in a double self-immolation in Aba prefecture, Tibet rights advocacy groups said. Seventeen-year-old Richen and his childhood friend Sonam Dargye, 18, were among the youngest to have died in the fiery protests.

The protests have continued despite an intensified crackdown in Tibetan areas by Chinese authorities hoping to stop the self-immolations. Authorities have detained and jailed Tibetans they accuse of helping others self-immolate, an act that Beijing now considers a crime. Tibet and adjoining ethnically Tibetan regions have been sealed-off to most outsiders, making independent confirmation of the self-immolations virtually impossible.

A woman who answered the phone at the Communist Party’s propaganda department in Gannan prefecture, which oversees Luqu county, said she was unaware of the reported self-immolation, while county officials could not be reached. Authorities in Qinghai’s Haidong prefecture, where the second protest took place, either could not be reached or said they had no information on the case.