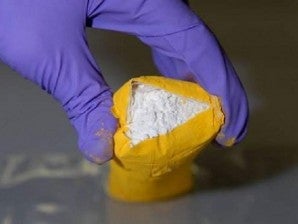 PRAGUE—Customs officers at Prague international airport seized a record 31 kilograms of cocaine hidden in the luggage of three Dutch passengers, they announced Tuesday.

The haul on Monday, worth 60 million kroner (2.3 million euros), “was without doubt the largest” ever at the airport, customs spokesman Jiri Bartak said.

Officers found 25 packets containing the drug stuffed in the cases of the two men, aged 73 and 21 years old, and of a 49-year-old woman. It was based on a first chemical analysis of the contents. The three had boarded the plane for Prague in Punta Cana, Dominican Republic.