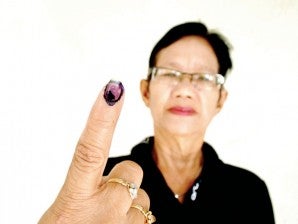 MANILA, Philippines—A former Commission on Elections (Comelec) lawyer, who earlier blew the whistle on the shady deal for the purchase of P690-million worth of ballot secrecy folders in 2010, has asked the election body to closely monitor the procurement of indelible ink, indicating possible irregularity in the project.

In a letter, former Comelec lawyer Melchor Magdamo claimed that PhilTint and Color Specialist Inc., the lowest bidder for the supply of indelible ink for the upcoming May 13 elections, has “controversial roots traceable” to OTC Paper Supply.

The latter was the winning bidder for the supply of 1.8 million ballot secrecy folders during the 2010 first automated elections. But the Comelec scuttled its planned purchase of the folders at P380 each after they were found to be overpriced.

The Office of the Ombudsman found at least three members of the commission’s BAC liable for the overpriced deal and ordered them suspended for six months without pay. They were also subsequently slapped with administrative complaints for the controversial deal.

Records from the Comelec showed that PhilTint’s bid has been declared as the lowest calculated bid in the P73.2-million project for the supply of 520,000 bottles of indelible ink. Their product is currently undergoing post-qualification screening.

Magdamo alleged that the owners of PhilTint were related to the owners of OTC Paper Supply. The president of PhilTint, which he identified as Mae Syki Young, is the wife of OTC manager Henry Kwok Young, according to Magdamo.

He also noted that PhilTint had the same office address as OTC, at 451 De la Cruz Street, Santa Quiteria, in Caloocan City.

Magdamo’s letter was addressed to Ombudsman Conchita Carpio Morales, through the resident Ombudsman for the Comelec in Intramuros, Manila.

“Considering PhilTint’s controversial roots traceable to the infamous OTC Paper Supply, it is wise for the Honorable Resident Ombudsman to be more vigilant in monitoring the ongoing procurement of indelible ink,” said Magdamo.

When asked for comment, Comelec Chairman Sixto Brillantes Jr. said the election body could not prohibit PhilTint from participating in its bidding processes because it was not blacklisted in the first place.

“I think what is important in any bidding is that the lowest bidder has the quality. It does not matter whether they have a previous [record]. They are not blacklisted anyway,” Brillantes told reporters in an interview on Monday.

He also noted that if PhilTint passed the post-qualification screening, the commission would have to reward the project to the company.

The Comelec chief also said Magdamo seemed to have an ax to grind with the Comelec under the administration of former Comelec Chairman Jose Melo. “I think he (Magdamo) is more of a guy who wants some publicity because apparently he has been forgotten already after the secrecy folder in 2010,” added Brillantes.