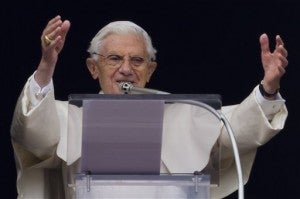 Pope Benedict XVI delivers his blessing during his last Angelus noon prayer, from the window of his studio overlooking St. Peter’s Square, at the Vatican, Sunday, Feb. 24, 2013. Benedict XVI gave his pontificate’s final Sunday blessing from his studio window to the cheers of tens of thousands of people packing St. Peter’s Square, but sought to reassure the faithful that he wasn’t abandoning the church by retiring to spend his final years in prayer. AP PHOTO/DOMENICO STINELLIS

VATICAN CITY—Investigators into the so-called “Vatileaks” scandal were to meet with Pope Benedict XVI on Monday, two months after submitting their secret report into the leaks of papal documents to a journalist.

The three retired cardinals, Julian Herranz of Spain, Slovakian Jozef Tomko and Italian Salvatore De Giorgi, were set to see the pope at 11:00 am, according to the Vatican’s daily program.

The 85-year-old German pope cited his age as the main factor in his nearly unprecedented decision, but observers said Vatileaks may have been the last straw in a scandal-ridden papacy.

The run-up to next month’s conclave to elect a successor to Benedict has seen new scandals and allegations emerge, including claims of “inappropriate behavior” on the part of one of the cardinal electors, Keith O’Brien of Britain.

Already four other members of the conclave are associated with the paedophile priest scandals that have dominated Benedict’s eight years on the papal throne.

The Vatican’s Secretariat of State — the government of the Catholic Church — took the unusual step on Saturday of issuing a statement slamming “completely false news stories” as an attempt to influence the secret conclave.

Italy’s Panorama news weekly and the Repubblica daily had said on Thursday that the cardinals’ report to the pope contained allegations of corruption and of blackmail attempts against gay Vatican clergy, as well as favouritism based on gay relationships.

The report was meant to be strictly for the pope’s eyes only, but Italian media have said the cardinals will also share their conclusions with other cardinals before the pope’s departure on Thursday.

In a statement on Vatican Radio’s website, Lombardi said: “There are people who are trying to take advantage of this moment of surprise and disorientation of weak souls to sow confusion and discredit the Church and its government.”

The three cardinals — all over 80 and thus not entitled to vote in the conclave — questioned dozens of Vatican officials, both laypeople and clergy, in parallel with a police probe.

They presented the pope with their final report in December, just before Benedict pardoned his former butler Paolo Gabriele, who had been jailed for leaking the papal memos, while banishing him from the Vatican.

A Vatican communications aide, Greg Burke, said in an interview published Monday that the media “could try” to influence the conclave, adding that “some can be truly odious”.