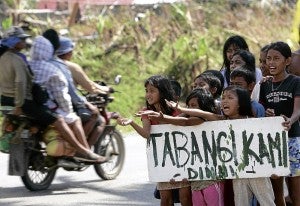 DAVAO CITY, Philippines—More than 3,000 residents devastated by Typhoon Pablo in the provinces of Compostela Valley and Davao Oriental marched to the gates of the regional office of the Department of Social Welfare and Development here, on Monday, and set up camp to demand that government extend relief operations.

Barug Katawhan, who also led the 10-hour road block in Montevista last January 15, said the protest action would be a way to express the rage of the typhoon survivors against what they called as the inept delivery of relief and rehabilitation services, most especially in the far-flung areas.

The group called the March 19 deadline for the distribution of relief goods illogical, considering that many residents have been suffering from hunger and malnutrition.

“Our suffering has not yet ended. Hunger still haunts our villages most especially now that we are once again devastated by Tropical Depression Crising,” Karlos Trangia, Barug Katawhan, spokesperson, said.

The protesters are also demanding for the immediate release of 10,000 sacks of rice without any preconditions from the agency.

Social Welfare Secretary Corazon Soliman committed during the Jan. 15 barricade that she would release the rice to the group but reminded them to comply with government requirements on the documentation of beneficiaries.

The requirements include the distribution plan and a master list of the recipients.

Trangia explained that the organizers and the residents were apprehensive about giving their names because the government might use it to file charges against them.

The local police force of Montevista has already filed cases against eight leaders of Barug Katawhan and support groups who organized and participated in the road block.

“The residents are afraid to give their names. We do not know where this list will be used,” Trangia said.”

Soliman earlier clarified that the residents had nothing to worry about, saying it has never been the policy of the DSWD to hand over documents to the police and military.

Trangia, however, asserted that if the government was sincere in providing services, the government should have already drawn up the list, based on their ground monitoring.

“They should not pass the burden to the people. We have lost almost everything. It is time for genuine government services,” Trangia said.

“We also wanted to know where every single centavo given by foreign donors went. If it will be proven that there is corruption, then the leaders of DSWD must be held accountable for it,” Trangia said.

Trangia said they would not leave camp just outside the DSWD until their demands are met.