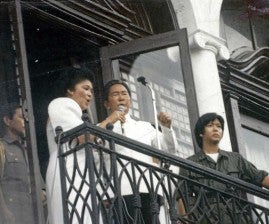 FINAL MOMENTS President Ferdinand Marcos speaks from the Malacañang balcony after the dictator’s inauguration in this Feb. 25, 1986, photo. With him are his wife, Imelda, and his son Bongbong in combat attire.
PHOTO CONTRIBUTED BY C. FERNANDEZ

MANILA, Philippines – A staunch loyalist of the late Ferdinand Marcos on Monday insisted that the Edsa People Power Revolution was the result of a ‘’mob rule’’.

The nation observed on Monday the 27th anniversary of the uprising which toppled the Marcos administration.

President Benigno Aquino III, in his speech during a program commemorating the 27th anniversary of the EDSA Revolution, said that the lessons of people power remain relevant to this day.

He urged Filipinos to remember what it took to win back democracy during the Marcos regime and announced that he has signed into law the Human Rights Victims Reparation Act of 2013, a legislation which seeks to provide compensation for human rights violations victims during martial law, including claimants of a previously resolved case at the US Federal Court in Honolulu, Hawaii.

For more of the interview, listen to Radyo Inquirer 990AM.