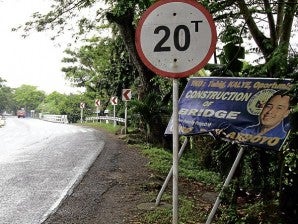 A BILLBOARD on one end of San Isidro Bridge in Pamplona, Camarines Sur, along a stretch of Maharlika Highway proclaims a project there to be that of Rep. Dato Arroyo. Camarines Sur Gov. Luis “LRay” Villafuerte Jr. had pointed to this and other billboards in the area of Arroyo as samples of “epal” materials. CONTRIBUTED PHOTO

The Department of Public Works and Highways (DPWH) on Thursday said it will tear down all illegally placed election materials throughout the country.

Public Works Secretary Rogelio Singson has ordered all DPWH officials nationwide “to remove and tear down all unlawful election materials posted in areas which are not official Comelec (Commission on Elections) designated posting areas,” the DPWH said in a statement.

Singson also ordered the banning and removal of election propaganda materials posted alongside or in all ongoing or recently completed DPWH projects.

“This is our way of supporting the ‘anti-epal’ campaign, or the citizens’ call on politicians not to use government projects as accessory resources to drumbeat their accomplishments at the expense of taxpayers’ money,” said Singson.

“These unlawful materials pose danger to motorists because the road safety signages or structures are peppered with these propaganda election materials. Oftentimes, the traffic directional signs cannot be read legibly by the motorists,” added Singson.

He said the agency will protect government property from being used as accessory resources of any candidate regardless of party affiliation or groups wanting to have name recall through self-serving public displays of their propaganda materials on projects funded by taxpayers’ money.

He instructed DPWH fieldmen to document and report or coordinate with local Comelec offices prior to the removal of materials to ensure compliance with campaign rules.

In Davao City, Vice Mayor Rodrigo Duterte criticized an antipolitical dynasty group for zeroing in on local politicians in their campaign against dynasties and sparing national figures, including President Aquino.

Duterte said the disqualification case filed against him and several other members of local political clans by the group Anti-Political Dynasty Movement smacked of double standard.

“Why not include Noynoy (President Aquino’s nickname)?” said Duterte.

Speaking at the Philippine Councilors’ League convention in Davao City last week, Duterte said: “Why only us? Why not include Noynoy?” President Aquino belongs to a family long entrenched in Philippine politics. With a report by Germelina Lacorte, Inquirer Mindanao