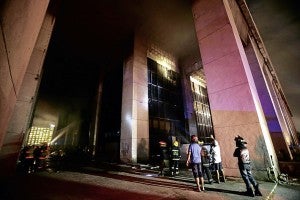 The night’s performers were putting on makeup when the ultimate show stopper came.

A three-hour fire damaged about a quarter of the three-decade-old Manila Film Center (MFC) Tuesday night, forcing its current user—a production outfit aspiring to be the “biggest transvestite theater in Asia”—to cancel its shows indefinitely.

The structure is believed to be haunted by spirits after its rushed and reportedly disaster-stricken construction in 1981 during the Marcos regime.

Located at the Cultural Center of the Philippines complex in Pasay City, the MFC has been leased since 2007 to Amazing Philippine Theater, which mounts evening shows Tuesday to Sunday.

It has been the home of the Amazing Show, mainly musical numbers by gay performers.

The talents were preparing for the 7:30 p.m. show when they heard popping sounds shortly before the fire broke out at the back portion of the second floor, according to Fire Officer 2 Randy Llonoso of the Pasay fire department.

The blaze apparently started at the administration office, Llonoso added.

The fire also damaged parts of the first and third floors, and left the stage, escalators and elevators covered in soot, the officer said.

No one was reported hurt thanks to the quick evacuation of the performers and crew. Damage was placed at P1.2 million.

Production staff members who were cleaning up the place on Wednesday said the show had been canceled indefinitely. With a report from Inquirer Research