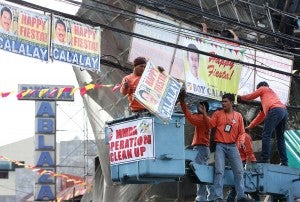 MANILA, Philippines – With candidates taking advantage of the fast-growing Internet medium to campaign, the Commission on Elections (Comelec) is receiving a lot of help from netizens in discovering campaign violations both online and in the streets.

“In the past, if the Comelec was only depending on its own personnel, it would be very very difficult to discover violations,” Director James Jimenez of the Comelec Education and Information Department told reporters Wednesday.

“But now with everyone coming in on the action, discovering violations is becoming more and more an everyday occurrence,” he said.

Jimenez attended a forum organized by the Internet and Mobile Marketers Association of the Philippines (IMMAP) to talk about Comelec’s rules and regulations on online campaigning.

When asked whether Comelec has the capability to monitor and enforce campaign rules on the Internet, he said that they are receiving a lot of help from people who report on potential violations through social media.

Comelec had recently launched their #SumbongKo people’s watch initiative that invites concerned citizens to report possible violations of campaign rules they see, such as posters placed in prohibited areas.

“We don’t have to go looking for [violations], people will report on it and people have been reporting on it,” Jimenez said. “A lot of the data that we get is crowd-sourced.”

He said that, in the past, he would ask the Comelec law department to issue five to 15 official notices for candidates with potential violations.

But with the help of reports coming in from citizens, he would be asking for the issuance of 30 to 40 notices in just one morning.