Nancy Binay: Let’s give guest bets until end of February to decide 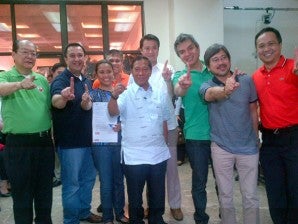 Nancy Binay filed her certificate of candidacy at the Comelec accompanied by her father Vice President Jejomar Binay and other candidates of the United Nationalist Alliance. MATIKAS SANTOS/INQUIRER.net FILE PHOTO

MANILA, Philippines — How long until the United Nationalist Alliance (UNA) decides whether to continue its support or let go of the three senatorial candidates it shares with the Liberal Party (LP)?

Asked about the fate of the three guest candidates during UNA’s visit to Pampanga, Nancy Binay on Wednesday said that she felt that the Vice President-led coalition could give them until the end of February.

Common senatorial bets senators Loren Legarda and Francis Escudero, and former MTRCB chairperson Grace Poe-Llamanzares have yet to show up at any of UNA’s sorties.

(Until the end of February…just like what Toby Tiangco had said we’re chasing and chasing but in the end gaining nothing.)

“Chiz (Escudero) said that at the end of the day it’s their choice kung sasama sila kasi sa amin (if they would join us), we will continue inviting until execom decides not to invite them,” Binay added.

Binay said that the guest candidates will have more to gain from joining UNA’s campaign rallies, but admitted that the coalition would also benefit from the three bets’ “winnable” factor.

She said that they are worth keeping as guest candidates, adding “I think may gain pa rin naman one way or another kapag kasama namin sila. Alam niyo naman winnable silang tatlo.”

Binay said that UNA will continue sending invitations to the three common candidates until their executive committee rules against it.