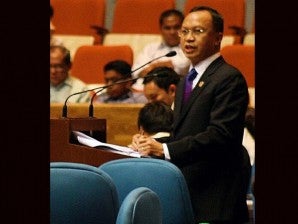 Evardone said the supposed collapse of the political partnership in Team PNoy is “part of a tsunami of intrigues” to break a formidable coalition.

“After they (referring to United Nationalist Alliance or UNA) failed in their attempt to win over our three official candidates — Chiz (Senator Francis Escudero), (Senator) Loren (Legarda) and (Grace) Poe–our adversaries are trying another move to distract our campaign,” Evardone said.

“It is unfortunate that they are resorting to this tactics. It is a sign of desperation. We reiterate our call to focus on issues and platforms in this campaign,” Evardone said.