PDI reporter, 23 others sworn in as new commissioned officers of AFP reserve force 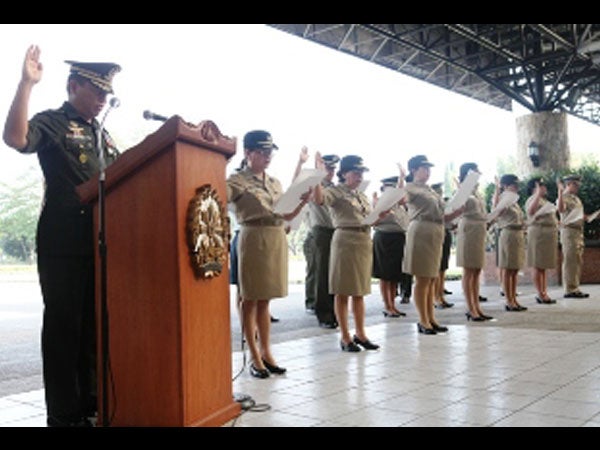 MANILA, Philippines – A newspaper journalist and 23 others took their oaths as newly commissioned officers in the military’s reserve force Monday morning at Camp Aguinaldo.

The new set of officers is part of Masters in National Security Administration (MNSA) Class 47 who finished the regular course last September. Having completed the course made them new members of the Armed Forces of the Philippines’ Reserve Force with the rank of Lieutenant Colonel.

One of the new officers include Nicolette Kristine Nonna Dizon, a Philippine Daily Inquirer reporter, who received the Academic Excellence Award from the National Defense College of the Philippines (NDCP) for finishing at the top of her class with a grade of 1.03.

Dizon’s paper, titled “Standing on a Seesaw: The Principles and Practice of Press Freedom and National Security in the Case of the 2007 Manila Peninsula Siege,” also received the runner-up recognition for the best thesis award.

Also the youngest from her batch, she is now part of the Philippine Navy’s Reserve Force.

“It’s an extraordinary feeling to be in uniform now; right away you feel there’s a certain kind of responsibility that you have to do and you have to fulfill as someone in uniform… as reservists, who got their ranks through the MNSA, we should also be able to prove to our higher officers and also to our troops that we can also deliver. Whatever profession that we have, whatever careers that we have, and what our expertise, we can also share with the AFP,” Dizon said.

The MNSA is a one year master’s degree program that gives a holistic view of the principles and dynamics of national security and students will undergo nine course works, paper work, strategic planning exercises and a two-week rigorous military training for the civilian students as a requirement for their commission into the military’s reserve force as lieutenant colonels.

In the same activity, Col. Dante Costes, the Commander of the Communication Electronics and Information Systems Service, AFP, and Navy Captain George F. Catameo, the Assistant J9, received their first stars formally promoting them to Brigadier General and Commodore, respectively.