Isko Moreno to file charges vs cops who arrested him, 5 others | Inquirer News
Close
menu
search

Isko Moreno to file charges vs cops who arrested him, 5 others 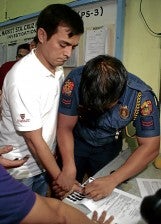 MANILA, Philippines- The camp of reelectionist Manila Vice Mayor Francisco Domagoso said Monday it is bent on filing charges against police officers who arrested him and five other fellow councilors over a bingo game last weekend in Sta. Cruz district, Manila.

Domagoso, a former actor more popularly known as Isko Moreno, said his camp will file on Tuesday charges of abuse of authority and assault on a person of authority, asserting that his group was arrested illegally.

He said separate administrative charges will also be filed against certain officers who allegedly manhandled his group. The cases will be filed with the Office of the Ombudsman and the National Police Commission “tomorrow (Tuesday) afternoon at the latest.”

“Out of 200 people, only six of us were arrested and their accusation was [a violation] of Presidential Decree 1602 (anti-illegal gambling law). But they thought of the charges only nine and a half hours after our arrest,” Domagoso said in a press conference Monday morning.

The camp of Domagoso and his mayoral running mate, ousted President Joseph Estrada, blasted the arrest as political harassment.

Incumbent Mayor Alfredo Lim, the rival candidate, has distanced himself from the arrest but held a media briefing Monday morning, asserting he had nothing to do with Domagoso’s arrest.

Asked if the cases could go all the way to Lim, Domagoso said in Filipino in half jest: “I don’t want to accuse him. All the policemen said was that the orders came from a higher-up. That’s why I just look up to the sky.”