Pope calls for Church to ‘renew,’ thousands flock to Angelus 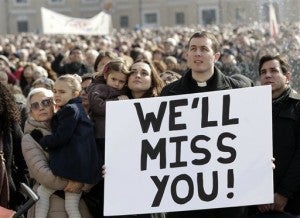 A priest displays a placard in St. Peter’s Square at the Vatican as he follows Pope Benedict XVI reciting the Angelus prayer from the window of his apartments, Sunday, Feb. 17, 2013. Pope Benedict XVI called on the Church and its faithful on Sunday to “renew themselves” as tens of thousands of pilgrims and tourists attended his penultimate Angelus prayers. AP PHOTO/RICCARDO DE LUCA

VATICAN CITY—Pope Benedict XVI called on the Church and its faithful on Sunday to “renew themselves” as tens of thousands of pilgrims and tourists attended his penultimate Angelus prayers.

“The Church calls on all its members to renew themselves… which constitutes a fight, a spiritual battle, because the evil spirit wants us to deviate from the road towards God,” he told the crowds from his window overlooking St Peter’s Square.

Families with young children, pensioners and nuns packed into the square in the sunshine said they had come to pay their respects to the pope, make their goodbyes or just share in a historic event ahead of Benedict’s resignation.

Groups of scouts held up banners reading “We have loved you so much!” and “We will be with you… always” and said they wanted to show Benedict that his shock decision to stand down on February 28 had not shaken their faith in him.

“He has done it for the good of the Church, and will keep serving us. He is retiring to pray—and God knows we need his prayers!” said Germana Blaiotta.

A serene-looking Benedict waved to the crowds and thanked them for turning out in such large numbers, calling it a “sign of affection and spiritual closeness,” as the onlookers called out “viva il papa” (long live the pope).

‘Benedict, whose surprise announcement last Monday that he would step down after eight years rocked the Church, called on the world’s faithful to “refocus on God by disowning pride and egoism.”

His words were seen by some to hold a veiled reference to internal bickering within the Church in recent months, as well as the jostle for power as cardinals from all over the world prepare to vote in his successor.

“Benedict did everything for the Church, he was always in the limelight but they did nothing but criticize him and try and undermine him. Whoever follows him will have to have strong nerves,” said Margherita Yager, 61, from Germany.

Christine Renier, a 48-year-old teacher from Paris, said she was in Rome on holiday and had wanted to see the pontiff before he retires to a secluded monastery behind the Vatican walls for a life of contemplation.

“It is a sad day, but I think Benedict was actually too rigid and lost many faithful among the young. I’m hoping for a pope who can throw out the bureaucracy and get back to the Church’s roots, perhaps an African,” she said.

Amid speculation over which of the 117 cardinals in the running might snap up the Vatican’s top job, Italian media said Cardinal Angelo Scola, the Archbishop of Milan, was among the favorites backed by Benedict.

After meeting the pope Saturday, Scola said Benedict had told him, “You have to become a light for everyone,” a phrase pounced on by the media as a clue.

“Significant words which will be weighed by everyone,” said the Repubblica, while La Stampa agreed they were “meaningful words.”

At St. Peter’s Square, tourists snapping souvenir photographs of Benedict on their smart phones said he may have revolutionized the papacy.

“This is a moment which will go down in history. He’s opened the door to future resignations and I cannot see anyone suffering through an old age as pope again. From now on they’ll retire,” said Michele Agostino, 66.

Later Sunday, the pontiff will start a week-long spiritual retreat and have only very few public engagements before he formally steps down—the first to resign voluntarily in 700 years.

Benedict will receive Italian President Giorgio Napolitano on Feb. 23, celebrate his last Angelus prayer on Feb. 24 and hold a final audience in St. Peter’s Square with tens of thousands of followers on Feb. 27.