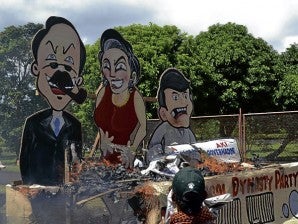 LEGAZPI CITY—A people’s initiative campaign to enforce a constitutional ban on political dynasties has been launched here by proponents collecting signatures from voters to force Congress to pass a law giving flesh to the Constitution’s antidynasty provision.

The campaign, led by the Bicol Autonomy Movement (BAM), collected nearly 1,000 signatures at the campaign’s launch at the Aquinas University of Legazpi (AUM) stadium here.

Dante Jimenez, BAM convenor, said the signature drive marked the start of a nationwide campaign to gather at least 1.5 million voter signatures by the end of April this year against political dynasties.

He said the signed manifesto would represent a people’s initiative to end the reign of political dynasties and the continuing violation of the Constitution.

The signature launch was followed by the burning of images representing political dynasties by the movement’s leaders—among them Jimenez, UP Prof. Romulo Tuazon and Abigail Nolasco of the late Jesse Robredo’s Tsinelas Movement.

Despite a provision in the Constitution banning political dynasties, no law has been passed to enforce the constitutional provision, according to the movement’s manifesto.

Prof. Tuazon said legislators would not craft an antidynasty law due to sheer greed for power. “After their term of office ends, they are merely replaced by their wives, husbands, sons, daughters, brothers and sisters,” he said.

Citing a study based on the 2010 election outcome, Tuazon said there are 178 dominant political dynasties, among which 100 are old elites and 78 are new elites, who emerged from the Edsa I and post-Marcos elections.

During the forum, Tuazon said he foresees all descendants of dynasties vying for Senate seats to win in the 2013 midterm elections.

“This would mean the Senate would be run by one to five dynasties, each with two members. He cited the Cayetanos, Enriles, Estradas, Cojuangcos-Aquinos and Magsaysays.

The Senate’s 16th Congress would have members from four past presidential families—Marcos, Aquino, Magsaysay and Estrada.