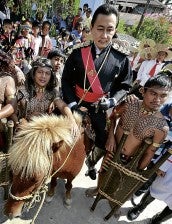 The movie “El Presidente,” which received multiple awards during the 2012 Manila Film Festival, is also the most debated film online.

But the great grandson of Emilio Aguinaldo, the first president of the Philippine Republic, said the film features what could be the most honest portrayal of heroes as human beings.

Emilio Aguinaldo Suntay III, administrator of the Aguinaldo Museum in Baguio City, said he always wanted to see a movie portray Aguinaldo as a man faced with impossible decisions in times of war.

The movie was featured at Baguio Cinematheque on Feb. 6, the 49th death anniversary of Aguinaldo.

In a speech he delivered during the event, Suntay said: “For too long our society has required our heroes to be perfect, flawless. We have overlooked the fact that they are humans like us, not gods. We at the Aguinaldo Museum have always highlighted [little discussed observations about our heroes]. [Jose] Rizal can be slow to act; [Andres] Bonifacio, temperamental and careless; [Antonio] Luna, ruthless and ambitious; [Gregorio] Del Pilar, a hopeless romantic; Aguinaldo, naive and too deferring.”

“They were nonetheless great men and heroes, in their own right and to their race,” he said.

A heroic Aguinaldo, as portrayed by Laguna Gov. Jeorge “ER” Ejercito who produced the movie, and a rebellious Bonifacio, as played by actor Cesar Montano, had divided critics, history buffs and the heroes’ supporters, Suntay said.

News of a Baguio screening sparked online debates about a supposed rivalry between the two heroes, which led to one account that Bonifacio was executed to prevent the breakup of the Katipunan amid the war with the American forces.

“The rivalry is an overused nonissue that only distracts us from the real glory and relevant issues of our past. The heroes were never rivals. They were patriots who passionately differed [about what needed to be done in the course of the Philippine Revolution],” Suntay said.

He said Ejercito’s movie gave some prominence to the Tejeros Convention of March 1897, where the Aguinaldo-Bonifacio rivalry was supposedly magnified, ending with the election of Aguinaldo as the republic’s first president.

Suntay said the movie relied on narratives and accounts never popularized in textbooks or history books, and showed a Katipunan that needed to keep its ranks intact in wartime.

“It did not even make Bonifacio a villain. Montano [who played the Katipunan’s founder] was portrayed as someone you would care for. You did not hate him in this movie,” he said, addressing misgivings that the actor’s portrayal was a poor depiction of Bonifacio.

He said the movie highlights many of the “hidden truths” that took place in the country’s history. One of which, he said, was that the humanity of heroes should outlast “the divisive myths that some historians and armchair generals would have us believe.”

“We desperately need to objectively and factually view our heroes as great though fallible and imperfect human beings. This will help us realize the heroes in ourselves,” he said.