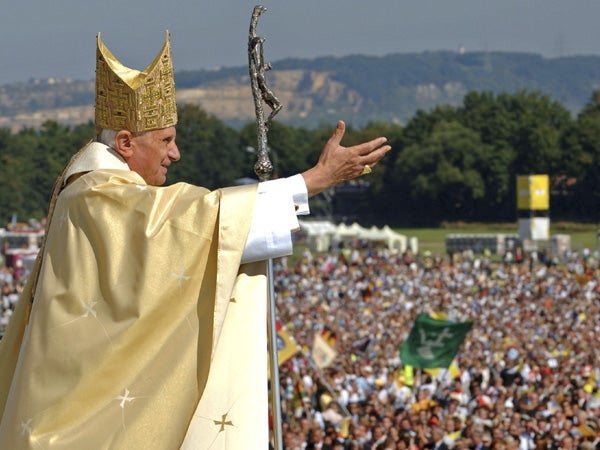 In this Sept. 12, 2006, file photo, Pope Benedict XVI waves to the crowd at the end of a papal Mass in Regensburg, southern Germany, some 120 kilometers (about 75 miles) northeast of Munich. When Benedict steps down on Feb. 28, 2013, his reputation as a brilliant theologian will remain intact. But he fell short of the mark he set for himself on unifying the church, building relationships with other religions and restoring the church’s influence in broader society. During his 2006 visit to Regensburg, he was sharply criticized by Muslims when he quoted a Byzantine emperor who characterized some of the teachings of the Prophet Muhammad as “evil and inhuman.” AP/Wolfgang Radtke, Pool, File

WASHINGTON—Pope Benedict XVI did nothing to punish pedophile priests or Church seniors who looked the other way, according to US and Irish victims hoping his successor will focus on fighting sex abuse.

Barbara Blaine, founder and president of the Survivors Network of those Abused by Priests, or SNAP, called the outgoing pope’s record “dismal.”

“He has made lofty statements. He has not matched those statements with deed or action. Under his reign, the children remained at risk,” Blaine said.

In recent years, the United States and Ireland have been among several countries rocked by successive sex scandals involving members of the Catholic clergy and Church higher-ups accused of covering up abuses.

This month, Los Angeles Archbishop Jose Gomez was forced under court order to release files on presumed cases of pedophilia involving some 100 clergymen.

Last year, Monsignor William Lynn of Philadelphia was sentenced to three to six years in prison for having hidden cases of sexual abuse and allowing at least two predatory priests to remain in posts in which they had contact with minors.

The US Conference of Catholic Bishops says that since 1950, more than 6,100 priests have been accused of pedophilia. Some 16,000 victims have been identified, and $2.5 billion have been spent on damages or rehabilitation therapy.

“This is not a US problem, this is a global problem,” Blaine said, stressing that the solution is “at the footsteps of Pope Benedict.”

“Even now in these next two weeks, he could take simple measures that would have wide-ranging positive impact to protect children and our Church across the globe.”

The pope, who plans to resign on February 28, could publish the names of predatory priests on the Internet, as 30 American bishops have, or order bishops to report all cases of sexual abuse to the police, Blaine said.

“I’m very happy that the pope is resigning because he really did not do very much about clergy sexual abuse,” said Robert Hoatson, president of victims aid group Road To Recovery.

“The next pope has to tackle this issue. This is the most important issue because it concerns children, and it is a worldwide problem and the pope has to commission a group of expert to determine what has to be done to solve this problem.

“And if it means firing all the bishops that have covered up, so be it.”

He worried that the Church will “keep everything covered up” unless it is ordered to reveal information about abuses.

In Ireland, the victims group Survivors of Child Abuse also welcomed word that the pope is stepping down.

“This pope had a great opportunity to finally address the decades of abuse in the Church but at the end of the day, he did nothing but promise everything and in the end, he ultimately delivered nothing,” said spokesman John Kelly.

“The Church cannot move on,” he added. “This pope’s tenure has been plagued by scandals and that will continue unless the pope addresses the root causes and that can only start from the top.”